Youth who served time for contempt apologises to court 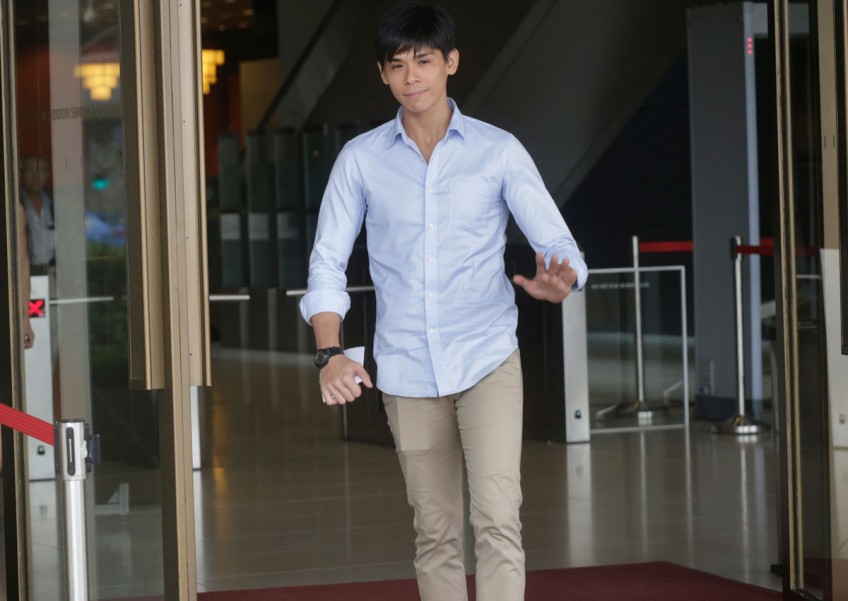 Months earlier, full-time national serviceman Pierre Chng Yuheng was a picture of defiance as he called his trial for threatening his landlady "biased" and a "sham" when he was on the stand.

Yesterday, in stark contrast, the 20-year-old appeared contrite as he apologised to the judiciary in a prepared speech.

His attire also saw a marked change - while he used to appear in court in T-shirts and jeans, he wore a well-fitting long-sleeved shirt and khakis yesterday.

Chng - who was fined $4,500 for criminal intimidation and jailed a week for contempt of court in March - told the High Court that he was "immensely sorry".

"I spent one week in prison and asked myself...why I was with criminals with varying offences, reflected and vowed that I would never go wrong with the law," he said.

He said he had put his mother in a state "worse than depression" as she had to borrow money so that he did not have to spend time in jail in lieu of paying the fine.

"All this would not have happened had I been more sensible at 17 years old," he said, his voice choking slightly.

Chng gave his speech after the prosecution asked the court for permission to withdraw its appeal against his sentences.

Justice Chan Seng Onn granted the request, telling Chng: "It's good that you realised your mistake and made a firm decision to change for the better."

Speaking to the media later, Chng said that he had been ostracised for the past 2 1/2 years, being subject to judgment by the public. He added: "My mother is a wreck after this entire saga."

Chng's mother used to rent part of a house in Paya Lebar Crescent from Madam Khoo Kim Cheng. The family, also comprising Chng and his two siblings, failed to pay the $1,500 rent after March 2013.

Chng said his family's water and electricity supply was cut and claimed Madam Khoo had called them names. On May 2, 2013, he threatened to ruin her and her family. Three weeks later, when she returned with two men to lock up the meters, he threatened her with a 1m-long tree branch.

Charged with criminal intimidation, Chng defended himself in a trial. While being cross-examined, he crossed his arms, glared at the ceiling and refused to answer questions. He said the trial was prejudiced and demanded that the judge be replaced.

In March, after being fined for criminal intimidation, he was also found guilty of contempt. He appealed but later dropped the case.

The prosecution also appealed. Yesterday, an Attorney-General's Chambers spokesman said that in withdrawing its appeal, it had considered, among other things, his "remorse and contrition for his offences - including the contempt matter".