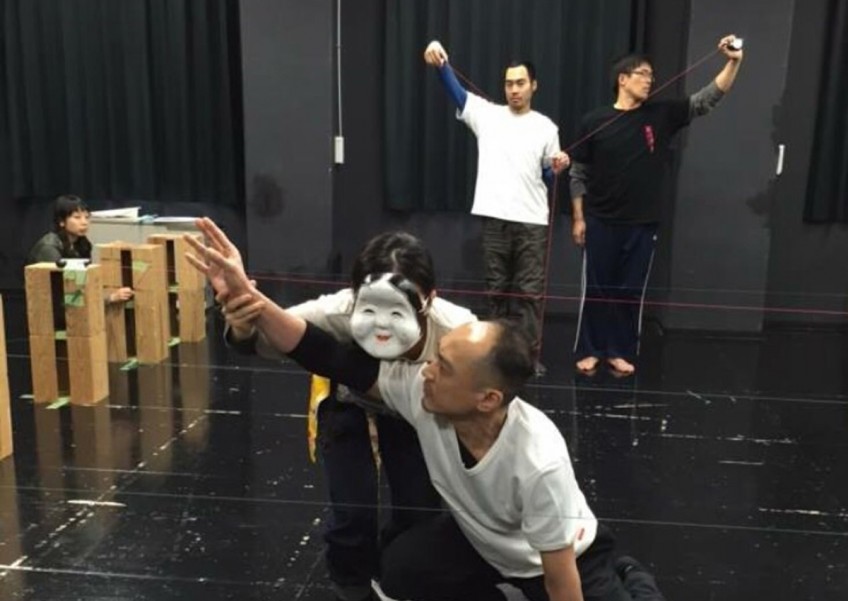 Seed will be performed by an all-Japanese cast.
The Finger Players

Two new productions in theatre company The Finger Players' 2015 season are related to Japan in some way.

An early excerpt of directorplaywright Chong Tze Chien's new play Seed was devised in Tokyo during the Asian Performing Arts Festival in 2013 with a predominantly Japanese cast.

He is the company director of The Finger Players.

The play contains multiple overlapping narratives revolving around the themes of love, sex and death and their relation to food. The full- length version of Seed was performed in Tokyo last year.

Seed is unabashedly Japanese. The cast for the Singapore show are all Japanese (the Tokyo staging featured a Vietnamese actor, but she is unable to make it this year).

Performed in Japanese with English surtitles, Seed references incidences such as the Fukushima nuclear disaster.

Compare this to The Spirits Play, penned by the late theatre pioneer Kuo Pao Kun, which will be retold by the theatre company's resident director, Oliver Chong.

Ostensibly, it purports to present the aftermath of war from the point of view of five Japanese spirits: Man, General, Mother, Girl and Poet.

Oliver Chong shared that when the play was first staged in 1998, it attracted brickbats for exploring the hardships faced by the Japanese, then still identified as World War II aggressors, in the aftermath of the war.

With this year's restaging, he aims to capture the play's universality.

"The bigger view of this play is that it's not about that particular war. Wars come in different forms - a war within ourselves, within a majority and a minority group - and these are happening all the time," says the 38-year-old director.

Chong Tze Chien, 40, is also breaking down barriers of his own with Seed.

For one, he does not speak Japanese and communicates with his cast through interpreters Tsuyoshi Kondo and Yui Terada, who are also part of the cast.

He describes the experience as "strangely comfortable".

On some of the cultural differences between him and his cast, he points to the neat row of shoes outside the rehearsal space, saying: "Theirs are always arranged properly. They are very disciplined as actors, arriving early for rehearsals and memorising their scripts very quickly. "

The cast have only good things to say about Chong, whom they call TC.

Futoshi Moriyama, 44, says: "Japanese directors are usually quite distant from the actors. With TC, we are friends in and out of the rehearsal space. One is not above the other."

Seed was created in four to five days in 2013 and then expanded and changed to its current form.

In contrast, the germination period for The Spirits Play has taken considerably longer.

Since 1998, it has been staged at least five times by six directors, including Kuo himself, Taiwan- based director Stan Lai, Ong Keng Sen during his capacity as artistic director of Theatreworks and Kok Heng Leun for Traditions & Editions Theatre Circus.

But Oliver Chong is up to the task. Not only did he research the various versions of the script, but he has also watched four of the previous adaptations, finding new things to discover about the script with each director's take on it.

His version of The Spirits Play will be minimalist, with elements of shadow puppetry.

In addition, he has the aid of actor Johnny Ng, 61, who played the role of Man in two versions of the play in 1998.

This time, he will be portraying the character of the General.

"I felt more pressure directing Off Centre by Haresh Sharma for the Esplanade's The Studios: fifty series. Maybe because Haresh was around to point out my mistakes if I made any," Chong says, in jest.

"I don't feel as much pressure doing this play. I am sure that Pao Kun will be happy to let me direct The Spirits Play my own way."

Bundle package for admission to both plays available at $64 from Sistic.