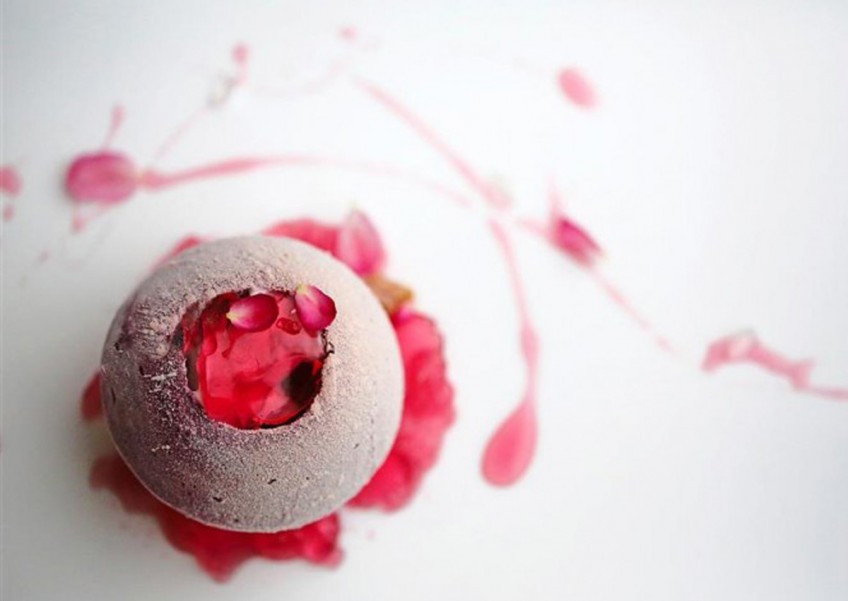 It's 5pm, and the female equivalent of Willy Wonka, Janice Wong, is methodically devouring a bowl of avocado salad at Cantaloupe, one of the city's slick dining spots, for lunch. It's an odd choice - far too ascetic for one who has made a profession out of following her heart - but Wong has a perfectly reasonable explanation for her choice: "I eat a lot of sweets so I try to balance it out by eating healthy whenever I can."

Crowned Asia's Best Pastry Chef by the prestigious Asia's 50 Best awards by S. Pellegrino two years in a row in 2013 and 2014, the 32-year-old Singaporean is fresh off a plane from Barcelona - where she engaged in "a meaningful sparring session" with Spanish pastry whiz Jordi Roca of the Can Roca fame - to attend a soiree hosted by the Singapore Tourism Board.

Entitled "Your Best Weekend Yet", this one night event aims to promote the country as a tourism destination. Wong isn't alone: she's accompanied by two of her most trusted chefs from her own restaurant, Singapore's famed 2am: Dessert Bar, and 400 individual pieces of sweet treats, from sugary orchids to chilli padi-infused chocolate bonbons.

Throughout her career, Wong has learned from, and swapped ideas, with some of the best pastry chefs in the business, including Jordi Roca of Barcelona’s famous El Celler de Can Roca.

These kooky confections will be part of an edible art wall that Wong has created especially for the night. Dubbed Pardes, or "paradise" in Hebrew, this Instagrammable swirl of fondant, chocolate, fruits and nuts is a homage to her birth country and its rich, ever-evolving flora and fauna.

Asked if it is finished, this young pâtissière replies enigmatically: "No. Like most artwork", it will never truly be finished." She's been busy assembling it since 10am, and will continue to do so after our talk.

As delightfully elaborate as it sounds, the idea isn't a new one. Conjured up by Wong back in 2011, the edible ceiling - which featured a cloud of marshmallows, and which possessed not only stunning good looks, but also a soupçon of novelty value - helped her gain cult status in Singapore.

It has been a huge surprise for Wong, whose foray into edible art was due to practical reasons more than anything else: "It was never about impressing others. It was more of 'Oh my goodness, how was I going to feed 400 guests simultaneously?' There were only so many servers and some people might miss out. That's how it came about." Since then, however, Wong is a regular fixture on the pop-up circuit, and these delectable displays have appeared everywhere from London to Beijing.

Chef Janice Wong’s claim to fame is her edible artworks. Created for a Singapore Tourism Board event in KL, this edible art wall took about a week to prepare and a full day to assemble.

And when she appeared as a guest chef on MasterChef Australia early this year, holding a tray of exquisitely crafted dessert that has prompted the final three contestants to behold - hands a-trembling and eyes wide - in wonderment, her reputation as Asia's dessert queen is sealed.

The sugar-dusted beauty, which is lovingly branded by Wong as "Cassis plum", possesses 10 textures, including "raspberry rice krispies which gives it a little crunch, cassis pastilles that give it a punch, and refreshing notes from yuzu caviar and yuzu tapioca rubies."

The zenith of her obsession with design and pastry, it's one of her most technically challenging creations and took her almost two months to create.

Of course, having a solid foundation to fall back on helps. After switching careers at the very last minute, this Economics graduate decided to embark on a sweet stint that brought her to the world's top patisseries and restaurants, including star chocolatier Oriol Balaguer's studio in Barcelona, Spain and the Picasso of Pastry, Pierre Herme's namesake boutique in Paris, France.

‘Light’ and ‘airy’ are some of the words that Wong uses to describe her Chocolate H20, another of 2am’s signature dishes. It’s made of chocolate mousse cake, salted caramel truffle and yuzu sorbet.

Still, there are some things one cannot learn no matter how hard they try, according to Wong, whose creativity has yielded a ton of creations that left others flummoxed as to whether these should be photographed or eaten, or both.

"You don't really learn in pastry…for me, it's an outlet to express myself," she says.

But what really sets Wong apart from other Asian pastry chefs is her constant desire to innovate ("It's so much easier to do something you know, but we'll never be able to progress if we keep sticking to the tried and tested").

At this very moment, she's working on a baking enzyme manufactured in Okayama, Japan. While the details remain unclear as the project is in its infancy, Wong says it will revolutionise the way certain desserts, especially nougats, are made.

"It's a bit like Play Doh," she says, face lighting up with excitement.

You’ve had chocolates but have you had glow-in-the-dark chocolates? Each individual piece was lovingly hand-painted for a 10m-long luminous sweets tunnel in Singapore in July this year.

As a new-generation patissier who is constantly searching for new ways to reinvent her craft, Wong has also realised how important it is to chime with the times. Looks matter, in this golden age of "food pornography" where anything edible is fetishised on social media.

At the winning end are those like Wong, whose glossy tempered chocolates and glittery sugars are elaborate and visually arresting. In between frenzied experimentations, she posts pictures of her finished creations on Instagram for her followers to gawk at. Many also end up on the menu at 2am: Dessert Bar, a culinary lab and patisserie that Wong opened back in 2007, in a bid to reinvent people's perception of desserts in Asia.

Dissatisfied with how desserts were never the highlight of a meal, Wong actively sought to change this perception with the opening of 2am: dessertbar.

If you really knew Wong, however, you'll know she doesn't really do it for the sake of courting "likes" and "shares". She certainly never prizes style over substance. "We'll see if a trend is viable before we take it on," she says. "Our top priority is flavour."

And "Pardes" - as the evening's invited guests will discover a few hours later - is not short on it. From the slow but surefire burn of red chillies in lollipops to the citrusy explosion of kalamansi pastilles, the flavours are all there, and they are bright and exotic, a taste of not just Singapore, but all of Asia, in a bite.

No wonder Wong is a star.