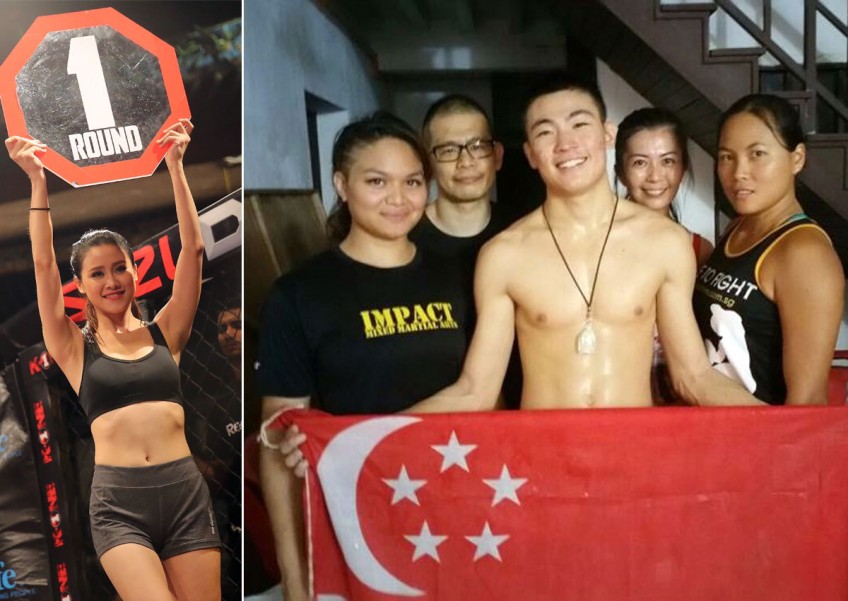 WINNER: Mr Alvin Ang, the only Singaporean in the MMA competition, won in the amateur lightweight category.
China Press / Facebook

It was an evening of flying kicks, strikes and choke holds as contestants pulled no punches at the inaugural Warrior Fighting Championship (WFC) last Saturday.

Held at the Leong San Tong Khoo Kongsi, a majestic Chinese clan house in George Town, Penang, the mixed martial arts (MMA) contest saw 20 contestants from all over the world taking part. Among them was Mr Alvin Ang, the only Singaporean.

Other participants were from countries like Russia, Indonesia and Malaysia.

Mr Ang, 20, a full-time national serviceman, did Singapore proud with a win in the amateur lightweight class against his Malaysian opponent, Mr Faizal Mohamed.

He joined the WFC after realising that one of the contestants had to pull out due to a dislocated shoulder.

In the three weeks before the fight, Mr Ang shuttled between his camp and the gym every day to train, clocking only four hours of sleep.

"I'm the type of guy who needs competition to get the drive to train seriously. If I don't compete, I will get complacent," said the NSF, whose debut fight was in March.

Rainy weather halfway through the event did not quell the spirits of the audience, who huddled in a sheltered area to watch the fight.

And Mr Ang did not disappoint.

He dazzled the crowd with an anaconda choke - an arm triangle from the front headlock position - that sealed the second win in his MMA career.

This article was first published on Sept 25, 2015.
Get The New Paper for more stories.