Singapore's football team can be like Japan in 5 years 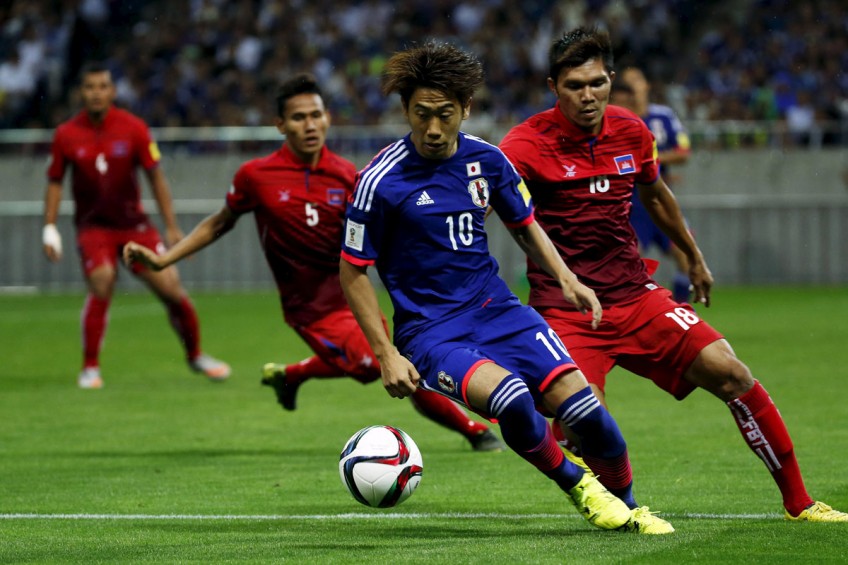 You've been here since April. What changes will you be making to the existing youth development system?

Sablon: The Junior Centres of Excellence (JCOE) set-up is one of them.

The idea of the JCOEs was the next step Singapore football needed to take, and it's good the FAS implemented it (in 2011).

Now, we must improve it.

First, with the number of training sessions because right now, the JCOE boys train only once a week.

In fact, between the ages of 10 and 13, which I call the golden age, they should train every day because it's not so much about physical training but more of polishing technical skills.

We are trying to have three sessions a week from next year: Saturday, Sunday and one weekday.

This is very important.

If you do not have the right technical education in these years, you will carry it on your back for the rest of your football career.

Secondly, we have to improve the content of these training sessions.

Which means you must be looking to improve the standard of coaching here?

Yes. Coaches' education is the most important pillar, and also the most difficult.

Our coaches are following and learning the Asian Football Confederation (AFC) courses but, in my opinion, there is a lot of improvement needed in those courses.

We cannot blame our coaches, because they had no opportunities to learn elsewhere.

An experienced coach like Richard Tardy (former Rwanda Under-17 coach who joined the FAS in July) can help mentor our local coaches.

It is our job now to come in here - it will take some months, for sure - in order to increase the quality of the coaches' education.

In December, for example, we will have a new coaching course.

How important will Tardy be to the revolution you hope to carry out?

The input of Richard in the national youth teams will be huge.

One of his main roles is controlling the preparation of the teams, like he did for the Under-15s and Under-17s before their AFC qualification tournaments (earlier this year).

After he spent four to six weeks with those teams, you could see the difference.

In about two weeks' time, we will be ready with our plan for national youth teams in 2016.

We are already in discussion with several coaches.

Then, we will define, per age category, the way we train our guys.

We will go in a professional way to prepare a yearly, monthly and weekly programme for all national teams.

Different teams will have different areas of focus.

For example, for the Under-14s. There will be continuity from the building of technical ability period, to implementing it in games.

How far can you take Singapore football?

In one year, we will see a difference, for sure.

And in three, maximum five years, we should be able to compete with the best countries in Asia.

The trendsetters in Asia are Japan, Australia and South Korea, in terms of football and in coaching.

We should not try to copy the coaching courses from Europe and apply them here.

We have to take the standards from Asia. We will grow and try to reach that standard.

But we need support; we need money, coaches, facilities, a lot of things.

Since April, I have met and discussed with many key partners the areas where we need their support.

If we secure the support of all key partners as well as sufficient funding, I am confident that our teams will be able to get to that level.

We can achieve more success if all key partners come on board and join us in this journey. Only then, can we match the likes of Japan and move higher.

The vision has been defined.

We fixed our targets and the keys to achieve them, because if you don't know where you are going, you will end up some place else.

As technical director, I have to fight for what we believe.

You spoke about the U-14s earlier. I hear you have been very impressed with the team...

I'm not impressed by a team, but rather, the quality of the individual players in a team.

Developing teams is not our goal.

Our goal is to develop individual players for the future senior national team.

Now we see at a younger age, such as in the U-14 and U-13 teams, about five or six very talented players.

In fact, in that way, I see the same evolution here as in Belgium.

When we started (the famed Belgian masterplan) in 2004, we only had five or six players at a sufficient international level as well.

But, after three or four years of following the system, Belgium had 15 or 16 of those kinds of players.

It was all down to the system.

Previous European technical directors like Denmark's Jan Poulsen (1999 to 2003) and Serbian Slobodan Pavkovic (2008 to 2014) also tried to implement sweeping changes to the youth set-up in Singapore, but failed partly due to the resistance of local coaches. Do you have this problem?

It's our job to convince the coaches this (system) is the best solution to develop players.

In the beginning, it's always a little bit of looking for the right way and right context.

Once we start with a good team of coaches, with a new mentality, with a new plan and approach, I'm sure it will work.

If they work hard and do the utmost to improve and apply the development plan, we will be there to help.

Do you agree our young players also lag behind their regional counterparts in physical terms? Attributes like pace, stamina, strength?

I watched two games when our Under-15s played in their AFC qualifying tournament last month.

After an hour, four of our players had cramps.

I'm not a physician, but I know that's not normal. This is not good.

So we need to improve the capacity of our players not just technically and tactically, but also physically.

I am working closely with FAS' football science and medicine department.

They have done a lot of good work in terms of injury prevention and several physical development plans for different age categories, among others.

Nutrition is also another thing.

During that qualifying tournament, the players ate the same things as the officials did. That's not right, eh.

We saw earlier this month how fans showed their displeasure towards the senior national team for drab performances in recent wins over Afghanistan and Cambodia. Do you think the criticism is justified?

With the national team, of course, the performance was not good, but you cannot change (the ability of) those players.

But, for our youth teams, it's a process. We will not be satisfied if our youth teams play with the same rhythm and speed as what we saw of the senior team.

We will oblige the players to play quicker, more technical, tactically better.

For sure, we will not see this from our young boys in January or February next year; it will take a year or two before they can start to play the way we want to.

When you start a plan like this, the most important thing is the long-term definitions.

We need three to five years to fully realise the vision.

It was the same in Belgium.

At the start, people were sceptical.

But those sceptics disappeared when we started winning, and started playing better.

This article was first published on October 23, 2015.
Get The New Paper for more stories.