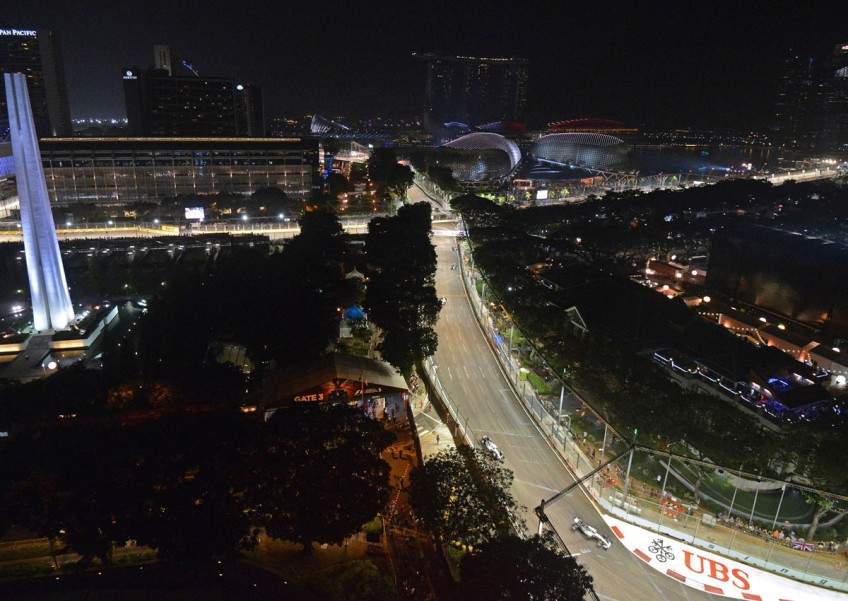 Monaco sees Formula One cars zipping past luxury yachts and luxurious apartments; Monza's picturesque circuit is so steeped in racing folklore that turns have their own names.

The Singapore Grand Prix may lack the features treasured by F1 purists but, bathed in floodlights and freshened up by Marina Bay's iconic backdrop, it has found a balance between drive and jive.

As soon as the 300kmh mechanical beasts return to the garage, it can be argued that the real show begins with the post-race concert at the Padang.

Over the weekend, thousands packed themselves like ants to hear hip-hop star Pharrell Williams say he is happy, and rockers Bon Jovi reminded everyone to have a nice day.

It is Uniquely Singapore - and a roaring hit with fans who continue to throng the world's only full night race in its eighth year.

At a time when many sporting events struggle to sustain corporate dollars and fan interest, the million-dollar question is, how have organisers managed to keep Singapore in top gear?

Quite simply, by putting on a good race and a good show, which together make for a great spectacle.

Times and tastes have changed.

Sport is no longer defined by athletic activity alone. Fans expect to be entertained and engaged from the moment they enter a venue.

The US Open tennis tournament, for instance, has dance-offs during change-overs. National Basketball Association games are known for holding contests during time-outs, while the Super Bowl half-time show has taken on a life of its own.

Closer to home, others have tried to replicate Singapore's F1 formula, but not all have succeeded.

Sepang has held post-race concerts from 2009 but still struggles to fill stands, hitting a low of 100,000 last year despite being one of the most affordable races.

India and South Korea have dropped out of the calendar entirely.

Abu Dhabi fares better, kicking off its inaugural 2009 edition as the first twilight GP with a post-race Aerosmith concert. After attracting a record crowd of 60,000 last year, the upcoming season-ender in November has lined up four days of entertainment, currently headlined by Latin pop king Enrique Iglesias. It is the 19th and final race of the season that began in March in Australia.

The new Russian GP in Sochi next month will be backed by mixed martial arts championship bouts, an extreme stunt riders' show and street theatre displays.

What Singapore has done - and must continue to do - is stay relevant to today's sports fan, who is more discerning and less patient.

Short of including Orchard Road in the circuit or hoping for a Sebastian Vettel-like upset again, there is not much else you can do to freshen up a track known for its procession races.

Six of the eight editions have been won from pole position.

The novelty of floodlights and the gleam of the cars have also worn off, particularly as Abu Dhabi and Bahrain have joined in the evening act.

It is the off-track product, one that appeals to the whole family, that will ensure Singapore's night race stays bright.

Bon Jovi was trending on the local Twittersphere even as Vettel was popping the champagne over Ferrari's shock win on Sunday.

Fans were jostling for the best vantage points at the Padang concert venue, even as the race continued around them.

And while F1 purists may be up in arms over the perceived ruining of the sanctity of sport, the Singapore model could be the way to go.

In an e-mail reply to The Straits Times, F1 supremo Bernie Ecclestone said the race - up for extension in 2017 - has found its niche and will be in the Lion City "as long as we are wanted".

"The promoters always exert themselves and are as proud as I am for the way the event is presented."

But competition is intensifying from other sports in its own backyard. More event organisers are seeking a slice of the global sports market pie, projected to reach US$80 billion (S$113 billion) this year.

As such, sports tourists may no longer circle out mid-September as the time to visit the island-state.

If they wait till late October, they could watch tennis world No. 1 Serena Williams battle arch-rival Maria Sharapova at the WTA Finals Singapore. From next year, arriving in April will mean the awe-inspiring sight of the All Blacks taking on the Wallabies at the HSBC Singapore Rugby Sevens.

Throw in mixed martial arts, golf and swimming showpieces, and fans in and travelling to Singapore are spoilt for choice - but restricted by their wallet.

To justify premium ticket prices, the F1 model of developing fringe activities around the main offering is one tennis and rugby have also adopted.

The Singapore Sevens aims to cater to the whole family, from alcohol-free zones to customised shopping trips.

Like F1, it should also look at hosting a CEO seminar on the side, given how rugby is known as a gentleman's game played at the world's top universities.

In WTA's Singapore debut last year, 93,000 spectators watched the action over 10 days at the Indoor Stadium.

The fanzone outside drew some 129,000 fans to its interactive games and exhibitions, while pop diva Mariah Carey performed next door at the National Stadium in an F1-style sideshow.

It will be interesting to see if demand can be sustained. The average Singaporean may go for the first edition of the WTA, if nothing more than to put up pictures of their attendance on social media. Others may have wanted to see Williams' booming serve or hear Sharapova shriek.

But like the F1 cars, the sights and sounds will eventually stop producing slacked jaws. And this is where the Singapore GP deserves plaudits for staying strong after eight years.

In a sport which is very technical and sometimes hard to get one's head around, it has done very well to get access to more than just motorheads.

According to the Singapore Tourism Board, the race has pulled in more than 300,000 overseas visitors collectively and generates an average of $150 million incremental tourism receipts each year.

Since 2009, at least one A-list musical act has performed trackside each year.

The challenge for the Singapore GP is to keep improving - not just on its last staging but on rival races as well.

The competition only gets stiffer next year with the debut of Azerbaijan and Germany's return to the F1 circuit.

To promote itself, Singapore must look beyond F1 hotbeds Britain, Germany and Australia. The India market, for example, is ripe for tapping as the country's own race is sidelined by political issues.

But the core of any sporting event should not be forgotten when the race is marketed to new regions.

For Singapore to be recognised as a true global sporting hub, Vettel should not have to take a back seat to Pharrell.

This article was first published on September 24, 2015.
Get a copy of The Straits Times or go to straitstimes.com for more stories.