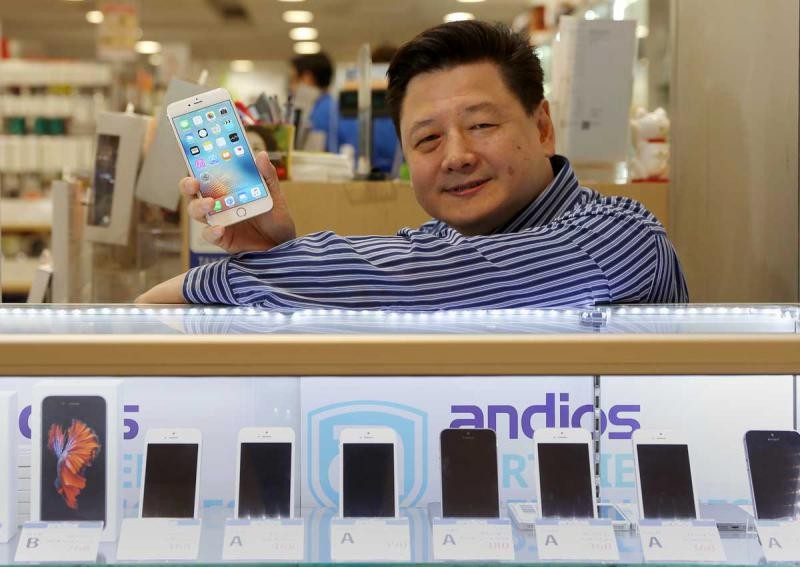 Singaporeans are readily selling their used phones, or the unopened sets they get from telcos after recontracting their phone lines, earning themselves yet another accolade in a recent study.

According to consulting firm Deloitte, Singapore has the liveliest used-phone market in the world, with a quarter of all smartphones here eventually sold in the second-hand market.

The global average is only 12 per cent, according to Deloitte's Technology, Media & Telecommunications Predictions 2016 report released in April this year. It polled about 30,000 mobile phone users in 20 global markets, including 1,850 people in Singapore.

I've never bought a used phone. My biggest fear is getting a lemon, especially phones that are out of their one-year manufacturer warranty. Most used-phone dealers do not provide warranty.

But I could be persuaded to browse in second-hand phone shops soon if more of them take the cue from new kid on the block Andios.

An eight-month-old venture backed by tech retail-chain Challenger Technologies, Andios puts its "Andios certified" stamp on all the phones it sells, guaranteeing that they are free of defects and providing a free one-year in-house warranty.

I believe what Andios is doing is a potential game changer that could make the used phone industry here even livelier than it is right now.

In particular, such warranty services should go down well with the rising segment of consumers who prefer buying used premium phones.

Preliminary numbers dovetail this possible future. Andios said that 60 per cent of its customers are upgraders. They desire the newfangled features of premium brands, but are unwilling to pay too much for them.

"A lot of them are students," said Mr Ben Tan, co-founder of Andios. "They want an iPhone to play the games that all their friends in school are playing."

In the past, the used phone market catered largely to foreign workers and those who needed a cheap set to replace the one they lost.

But technology upgraders are creating a second wave of demand, especially for premium handsets such as the Apple iPhone 6s and 6s Plus, and Samsung Galaxy S6 edge+ and Galaxy Note 5.

Last year, three-quarters of all new phones shipped here were premium models that cost US$300 (S$400) and above, according to market research firm IDC.

With Singaporeans changing mobile phones ever more frequently - as often as every 12 months, according to market-research firm GfK - these premium models inevitably end up in second-hand phone shops one to two years later.

Some of these models are selling like hot cakes today at second-hand shops. For instance, Andios, which sold 400 used phones over the past three months, said the most popular models were the iPhone 5s, 6, 6s and SE.

Another used phone dealer, WhyMobile, is attesting to similar trends, with popular models being premium ones from brand names such as Apple and Samsung.

"People who aren't in a rush to get the latest phone to show off wait and buy second-hand ones," said Mr Justin Lee, co-founder of WhyMobile.

There seems to be no lack of supply for such premium handsets in the second-hand market, going by shipment predictions from IDC.

Three-quarters of all new phones shipped here this year are expected to be premium models, creating a strong pipeline of premium used phones when their owners upgrade again next year.

A used phone is generally about 30 per cent cheaper than a brand-new set. But it is still a pricey purchase for many, especially with premium phones.

That's why I hope more used phone dealers would take a leaf out of Andios' book. A vibrant used-phone market is also one that provides consumers with assurance for their hard-earned purchase.

This article was first published on July 06, 2016.
Get a copy of The Straits Times or go to straitstimes.com for more stories.