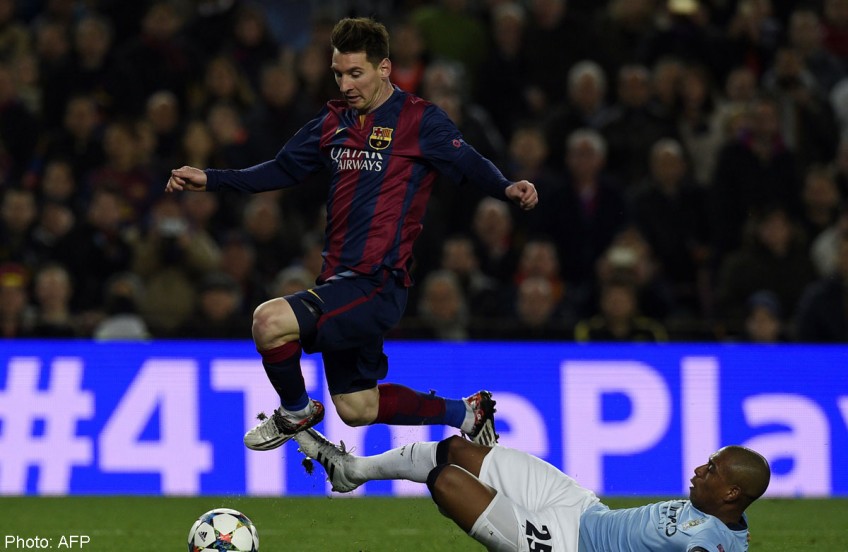 BARCELONA - Barcelona may have only beaten Manchester City by a slender margin but the way their Lionel Messi-inspired attack terrorised the Premier League champions' defence is an ominous sign for Real Madrid ahead of the 'El Clasico' on Sunday.

Barca sealed a Champions League last eight place with a 3-1 aggregate triumph following Wednesday's 1-0 win but some sloppy finishing and an inspired performance from City keeper Joe Hart kept the winning margin down to a respectable level.

However, the dominant performance would still have been pleasing for coach Luis Enrique, who in just a few months has silenced doubters questioning his credentials to become the leader of a side contending for silverware on three fronts.

The Catalan side are on a run of 17 victories from their last 18 games in which they have qualified for the King's Cup final and moved a point clear of Real Madrid in La Liga.

Luis Enrique and Messi had a highly publicised bust-up in late December with the Argentine left out of the starting lineup for the first game of 2015, which they lost away to Real Sociedad, as he returned late from a winter break.

Since then, Barca have only lost one game and Messi's enthusiasm has returned, with the player even training last Monday which was scheduled as a day off for the team.

While Messi has been the talisman, Luis Suarez and Neymar are also looking menacing in a potent three-pronged attack as Barca face a crunch clash with Real this weekend that could go a long way to deciding where the title ends up.

"We are playing well but we cannot get carried away because there is a long way to go," Messi told reporters.

"We have some big games... first against Madrid and then there are the quarter-finals (of the Champions League) where we will face another tough team."

By contrast, arch-rivals Real have stuttered of late, recording just one win from four games in all competitions and a defeat on Sunday would intensify the pressure on them.

"I have a lot of respect for Madrid. When Madrid are in this situation it is when they are most dangerous," Messi added.

"They have great players. We will go out to play our football and look to win but at the same time we need to be wary of them as much as ever."