Spa is where drivers can revive their F1 season 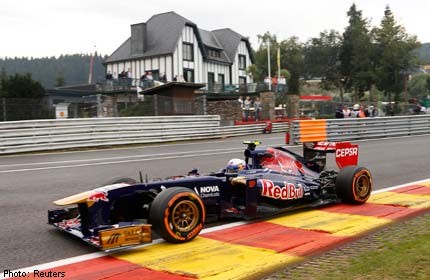 There is probably no better location for the 2013 Formula One World Championship to resume after its mid-season layoff, than with the Belgian Grand Prix at the Spa-Francorchamps circuit.

The 7km track, the longest lap on the F1 calendar, is a true classic; twisting and swooping along the top of the Ardennes mountains like a 300kmh roller coaster. It is little wonder that it is universally regarded as a fan and drivers' favourite. Even the normally monosyllabic Finn, Kimi Raikkonen, can be persuaded to wax lyrical about Spa.

"For me it is the greatest racing circuit in the world and it has been my favourite place since my first-ever visit in 2000 with Formula Renault," he says. "It's great to go racing with a modern car at a proper circuit which has such a great tradition. You can't get the same kind of feeling anywhere else."

The Spa circuit is, along with Monza, the oldest on the calendar. The first time Spa hosted a Grand Prix was in 1925, when the race was won by Antonio Ascari driving an Alfa Romeo for a team managed by the young Enzo Ferrari.

In 2009, Giancarlo Fisichella amazed everyone with an unexpected pole position for Force India. He was only edged out of victory by a determined Raikkonen, on his way to scoring his fourth win at the track and his last win for the Ferrari team.

Spa is also proof that, beneath its hard shell of commercialism, F1 has a soul. Due perhaps to its relative isolation in the Ardennes, it has never generated significant numbers of the lucrative corporate hospitality clients of other venues.

That in turn has meant that the track has never earned the revenues that other grands prix generate and in 2003 and 2006, financial issues meant that the classic venue was absent from the F1 calendar altogether. Spa, however, returned, not because of profits, but because the teams want it and it remains the ultimate driver's challenge.

Sadly it seems a great track cannot always ensure a place on the F1 calendar. The Buddh International Circuit rapidly earned itself the reputation of being the best drivers' track of the new-generation Hermann Tilke-designed venues. However, it remains absent from the projected 2014 calendar.

The organisers of the Indian Grand Prix are putting a brave face on things, by stating that the sabbatical will allow the race to move to an early-season slot in 2015.

However there is also concern that a lack of government support, in particular the bureaucracy and swingeing duty charges made by Indian Customs on the movement of F1 equipment, is perhaps leading F1 boss Bernie Ecclestone to look at less onerous locations.

Thankfully there are no such problems for Singapore, which is noted for the welcome it gives to its overseas visitors. This year, the Marina Bay Street Circuit will be enhanced yet further by the reprofiling of the controversial Turn 10 next to Singapore Cricket Club, removing the ungainly chicane to create a sweeping corner.

It is in fact, precisely how it was originally designed. However in 2008, the FIA invoked a minimum run-off area rule, which is proportionate to the approach speed to a corner. The speed of cars along St Andrew's Road and the close proximity of adjacent buildings meant that Turn 10 was unable to comply.

The solution forced on organisers was the infamous chicane. In fact its high kerbs caused more safety issues than they solved, with cars becoming airborne or clattering into the barriers with monotonous regularity.

Additional deformable barriers have now allowed the FIA to be convinced that Turn 10 should at last be the corner which it always should have been.