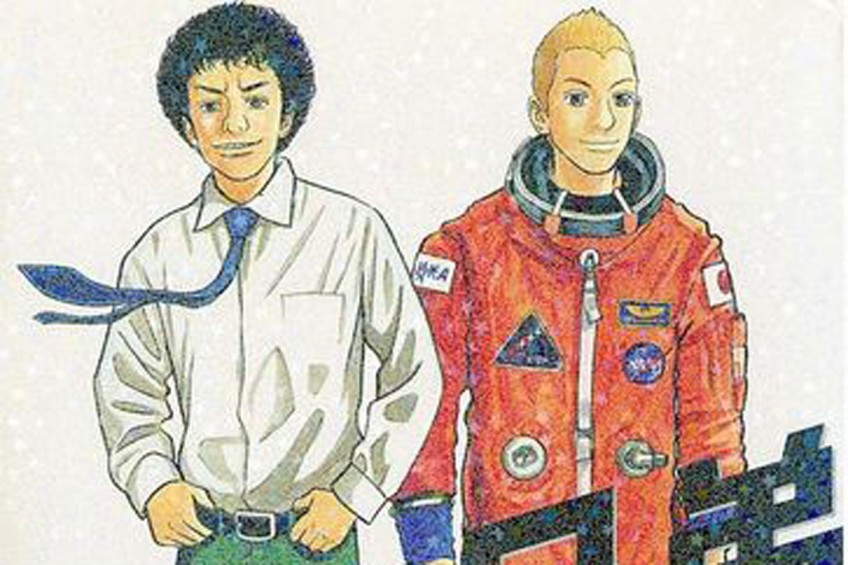 The manga this week

In the recently published 26th volume of "Uchu Kyodai," Mutta Namba stands on the moon. The manga has now been serialized for eight years, and those who have been reading it from the start must be deeply moved by the scene. But Mutta's younger brother, Hibito, in whose footsteps Mutta has been following, is not by his side.

The story is set in 2025. At the beginning, Mutta finds himself unemployed after losing his temper with a sarcastic superior. Prompted by Hibito, who is the centre of attention as the first Japanese crew member on a moon expedition team of the US National Aeronautics and Space Administration, Mutta takes a Japan Aerospace Exploration Agency (JAXA) exam for prospective astronauts. Mutta has a strong inferiority complex as he has lagged far behind his high-achieving younger brother. But Hibito still believes in a mutual promise he made with his elder brother when they were children.

This manga began being serialized in 2008, when many Japanese astronauts, like Akihiko Hoshide, Koichi Wakata and Soichi Noguchi were in the global spotlight for their work in places such as the International Space Station. Actually, the manga features few scenes in space. Instead, most of the story is spent on detailed descriptions of exams and training. What is creative in this manga is that space is described as a realistic workplace and an extension of our daily life, not as something in a sci-fi world.

A portion of the manga, up to about the eighth volume, was adapted into a live-action film in which Mutta passes the JAXA exam while Hibito leaves for the moon. So, some may believe the manga ends happily ever after, but things do turn volatile thereafter. Hibito, heretofore an elite, suffers physically and mentally after an accident on the moon. Mutta, who was an underachiever, slowly but steadily climbs the ladder toward space through his efforts and popularity. The brothers' fortunes are completely reversed. The manga's highlight is what Mutta murmurs on the moon. Personally, I had many complaints about this manga - its slow development, repetitive flashbacks, and too many episodes having nothing to do with the main plot. This climax scene, however, more than makes up for all that.

The story still goes on. Hibito will certainly return to space, and Mutta's final goal is an expedition to Mars. So, I won't complain any longer. I'll wait for the brothers to "moonwalk" together one day.