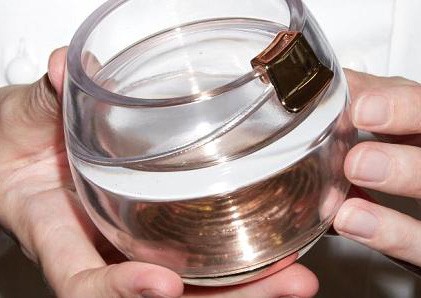 Scottish whisky producer Ballantine's has taken spirits to a whole new level, unveiling a "space glass" that lets you drink at zero-gravity.

The company, which was established in 1827, says it was looking to capitalise on an upcoming wave of space travel.

What, after all, would better accompany a voyage among the stars then a classic blended whisky-as long as the glass and beverage don't go flying?

"Space tourism is not too far away; people are going to be travelling to space as general tourists and like anyone will want to have that relaxing moment," Josh McCarthy, a senior brand manager for Ballantine's, told CNBC on Tuesday.

"They need glasses fit for purpose," he added.

The distillery joined forces with James Parr, founder of the Open Space Agency - a collective of tech connoisseurs, designers and outer space enthusiasts - to create the "space glass," finally settling on a prototype after 11 months of testing and splashing thousands of dollars.

"The issue was not just, 'can send whisky into space,' but 'how do you consume it'?," Peter Moore, Ballantine's global brand director, said.

The result? A curved plastic glass that is supported by a weighted rose gold base that, unlike other metals, won't affect the liquor's taste. The whisky is pushed down to the bottom of the glass by a convex base, which then spirals its way up the glass through a small glass tube around the edge, before reaching a rose gold mouthpiece that will help give the sense of a cold drink.

Ballantine's have also taken care of pouring problems, using an extremely strong set of magnets to connect the glass with a special nozzle that uses a one-way valve. The magnets can also help the glass dock to other metallic surfaces like walls.

The design will be reproduced using 3-D printing.

Unfortunately for enthusiasts, Ballantine's is still working on a release date for the glass, which still has to pass food and safety regulations before it can be sold.

In the meantime, the company is working on perfecting a whisky blend fit for space, where taste buds change, like they do during air travel.

Even astronauts could cheers to that.