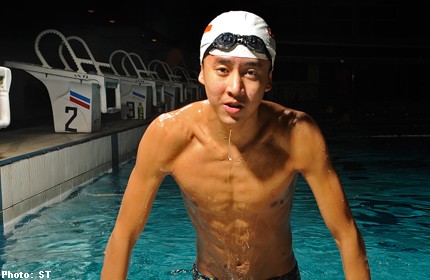 Quah Zheng Wen won three golds and a silver in individual events, plus a silver and bronze in the relays.

SINGAPORE - The medals bag might not be as heavy - or as shiny - as that from the last Games, but chef de mission Tan Paey Fern remains satisfied with Singapore's performance at the 2nd Asian Youth Games (AYG).

The Republic bagged five golds, 12 silvers and six bronzes to stand sixth in the medal tally and fifth in terms of total medals, among the 45 participating teams.

"I'm very happy with how we did," said Tan in a phone interview from Nanjing.

"You cannot compare it with the previous Games because we did not have the home advantage this time.

"Most of our athletes did pretty well. It's a good sign ahead of next year's Youth Olympics."

At the inaugural AYG in 2009, hosts Singapore had a surprise haul of nine golds, six silvers and 15 bronzes, to finish fourth behind China, South Korea and Thailand.

Bowling, which was not contested at these Games, accounted for three golds then.

Asian powerhouses China, who will be hosting next year's Nanjing Youth Olympic Games (YOG), topped the medal table this year with 46-23-24, an overwhelming lead over South Korea's 24-13-14. Japan came in a distant third with 7-5-6.

A total of 16 sports were contested, 12 fewer than the number that will feature at the YOG.

The Republic's medal charge this time was again spearheaded by the swimmers, who alone were responsible for 17 podium finishes (5-10-2).

They added two more silvers on Friday on the last day of competition, with Samantha Yeo and Nur Marina Chan each coming in second in the girls' 200m breaststroke and 100m freestyle respectively.

The 16-year-old Olympian, who won three individual golds and a silver, as well as a silver and bronze from the relay events, was Team Singapore's best performer.

Tan noted that participants in some sports, despite not winning any medals, had put in creditable efforts.

In athletics, for instance, more than half the team posted personal bests in their events.

"I think this was a good experience for our athletes, to know where they stand in Asia."