In S'pore: A gathering of fans of all stripes 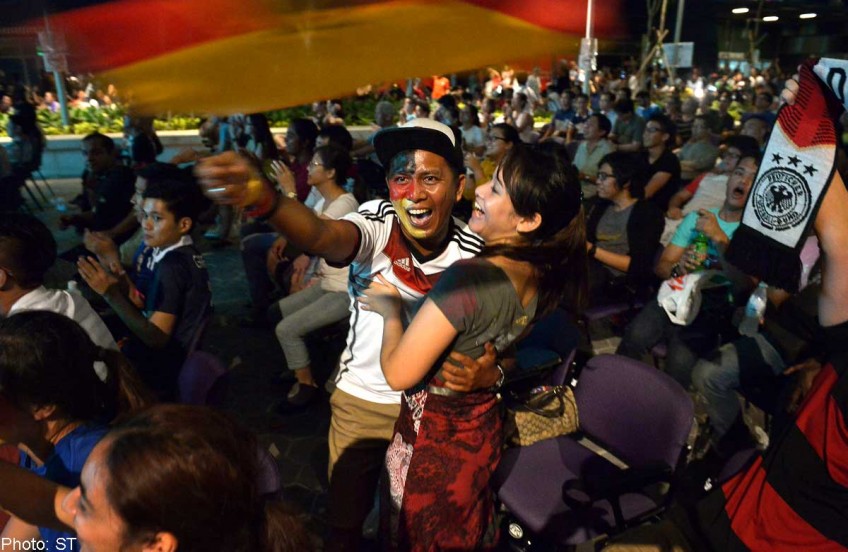 Football fans of all nationalities congregated to watch public live screenings of the Brazil World Cup final in Singapore.

In places like the Singapore Sports Hub, Hong Lim Park and various community clubs, they cheered and hollered as Germany edged out Argentina 1-0 in Rio de Janeiro to clinch their first World Cup title since 1990.

Naturally, it was the German expats who were the happiest as they celebrated Mario Goetze’s 113th-minute winner that made Germany the first European nation to win the Cup on South American soil.

“Finally, after 24 years, we are champions again!” exclaimed Mr Sven Bochl, 21, who wore the German jersey as he watched the match on a giant screen at the Singapore Sports Hub. “I am so, so happy, just over the moon,” he added, taking a selfie with friends to mark the moment.

Mr Steffen Koch, 50, the charge d’affaires of the German Embassy in Singapore, said: “We’ve not won an international competition since the European Championships in 1996, so this has made up for the pain of enduring 18 trophy-less years.

“What’s also heartening to see from this competition was Germans standing together and working alongside one another with great dedication.

“With so many young players at the heart of this team, the signs are good for the future of German football.”

For the Sports Hub, it was the first time a public live screening of the World Cup final was held there, as about 1,000 fans sat around the OCBC Square in front of Stadium MRT station.

Some had German and Argentine flags painted on their faces while others were armed with midnight snacks and coolers to keep their drinks cold.

At the Singapore Sports School, 300 students in pyjamas trudged from their boarding houses to the auditorium at 2.45am to catch the match. They took their jackets to keep themselves warm in the air-conditioned auditorium.

Argentina fan Andin Djayady was disappointed that his team lost. “(Gonzalo) Higuain missed some good shots before half-time and, if he had scored, it would have sealed the deal,” said the 17-year-old, a footballer himself.

The People’s Association said more than 570,000 people had visited its 58 CCs for screenings over the duration of the tournament.

“I wanted to thank them for organising these screenings, it must have been hard work,” she said.

Meanwhile, at Robertson Walk, German cheers of “Deutschland! Deutschland!” broke out after the final whistle blew.

Argentina fans were, however, more solemn. Many did not even stay to watch a despondent Lionel Messi take the Golden Ball award for being voted the best player of the month-long tournament.

Most of those who stayed up regularly to watch the matches gave the tournament a thumbs up.

Said engineer David Lee, 37: “I guess we will see fewer yawns and fewer pairs of sleepy eyes at work.

“I’ll miss this crazy 3am football season, but all good things must come to an end.”