S'pore team goes all out at 'Skills Olympics' 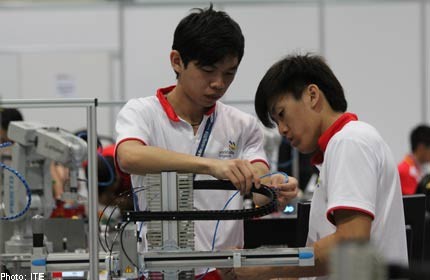 Mr Goh Kok Hong (left) and Mr Sean Tan, representing the Institute of Technical Education (ITE) at the WorldSkills competition are seen here working on a task during the contest.

SINGAPORE - The 22-strong Singapore team at this year's WorldSkills competition in Germany is feeling the pressure to do well. Their predecessors at the last event - dubbed the "Skills Olympics" - came away with a 14-medal haul that included four golds in London in 2011.

The biennial contest, which got underway on Tuesday and reaches its climax on Sunday, gathers representatives from different countries who are considered the best in their vocational fields. They are required to complete specific tasks within a time limit before being judged by a panel.

Singapore has sent its biggest team yet to Leipzig this year, including candidates specialising in 20 categories as diverse as robotics and beauty therapy.

The candidates come from the Institute of Technical Education (ITE) and polytechnics here.

Among them are Mr Sean Tan and Mr Goh Kok Hong, both 19, who won the ITE's first gold medal in mechatronics in the WorldSkills Singapore competition held in July last year.

The pair were picked for the international competition where they will represent ITE, despite both having graduated.

Mr Tan, an aeronautical engineering student at Singapore Polytechnic, said: "When you expect yourself to win and aim for a gold medal, if something goes wrong during the competition, you will be easily demoralised and it may be hard to regain your focus."

Mr Goh, who is studying aerospace electronics at the same poly, said: "I'm serious about my work. When it comes to my work, I always give my best. But I'm not thinking about winning because I did not train... to join a competition. I trained because I'm passionate about mechatronics."

It was likely their ITE lecturer, Mr Stephan Phee, who instilled in them that sense of professionalism.

"Competition is secondary, professionalism is primary. Winning a gold medal is just a five-minute glory that people will forget about in an instant," said the 34-year-old lecturer, who is in Leipzig to support the team.

The competition is taking place in five large trade-fair halls.

Each skill category has been given a designated area and competitors from various countries have their own booths to work in.

Some 200,000 spectators are expected to attend and so far, the aircraft maintenance category has drawn the most interest as competitors worked on a helicopter, checking for faults and leaks.

Nanyang Polytechnic student Chow Wei Li, who is working in that category, is not put off by the onlookers.

The 22-year-old, who has spent two years training for the competition, said: "There is no time to get distracted at all. You really have to focus to finish the tasks on time."

ITE chief executive Bruce Poh, who is the official delegate to the Singapore team of competitors, said WorldSkills International is more than just a competition.

He said: "It has become a national imperative for driving economic growth and competitiveness, and enabling social mobility."