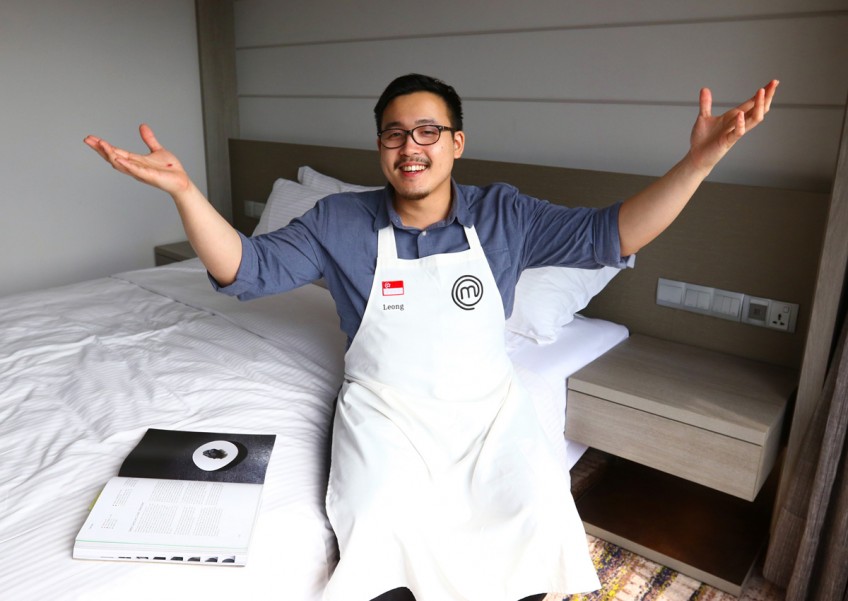 A Singaporean has beaten the competition to be hailed the first MasterChef Asia.

After four months of anxiety, Woo Wai Leong was relieved yesterday to find out finally that he had won.

Woo, known as Leong on MasterChef, had beaten Malaysian Marcus Low in the finale of the reality TV cooking show's inaugural season.

He hated the four-month wait for the result following the end of filming of the Lifetime series.

The 27-year-old had quit his day job as a lawyer to join the show, but he kept himself busy with his other job as a bartender.

In the week before the finale's screening yesterday, Woo said he suffered from anxiety.

People kept asking him who the winner was, reminding him of the very thing he was trying to avoid thinking about.

Woo told The New Paper: "I think when all of this (my win) finally sinks in, I'll be really happy.

"Now, I feel exhausted and just a major sense of relief.

"It is an honour to win this for Singapore. I'm very proud that I did it in the year of the Golden Jubilee."

MasterChef Asia is a top show on the cable channel since its premiere three months ago.

It had started out with 15 contestants from Malaysia, Indonesia, Taiwan, China, India, Vietnam, the Philippines and Singapore.

The dessert made up 40 per cent of the final score and Woo was confident that he had delivered a delicious mango lassi.

Woo said: "I believe it was a really close fight between Marcus and me.

"My strategy was to play to my strengths and present my food without mistakes."

On what he intends to do with his cash prize, Woo said that he might buy some fancy kitchen equipment, make some investments and donate.

Prizes aside, Woo is looking forward to continuing his culinary journey. He has a deep interest in Nordic cuisine and cited restaurant Relae in Copenhagen, Denmark, as his inspiration.

The eatery's food draws from the four seasons and the surroundings and focuses on making "humble" ingredients the highlight of the dish.

"I would like to understand the thought process of Nordic cuisine to see how they make simple food attractive again," said Woo.

He is also helping with fundraising for Tan.

A plea was sent out recently via social media that the cafe, which is usually closed on Tuesdays, would open every Tuesday and proceeds would go to fund Mr Tan's medical fees.

Woo said: "People may not know this, but those in the food and beverage industry are tight. We would help each other whenever we can.

"I don't know Sebastian personally, but next week, local bartenders and spirit suppliers are all coming together to sell alcohol for a day at Duxton and earnings will go to helping him pay for his medical expenses."

This article was first published on December 11, 2015.
Get The New Paper for more stories.