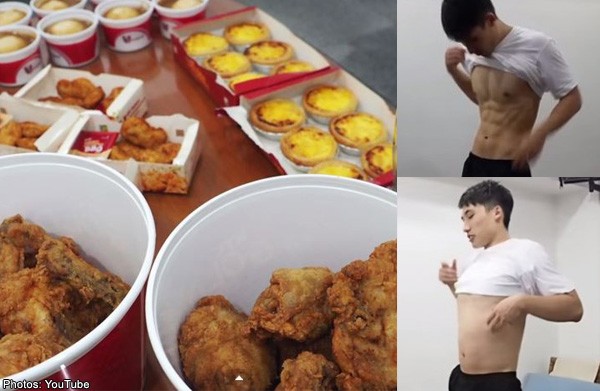 What happens when you chomp down on 10,000 calories worth of fried chicken in 45 minutes?

It makes one's abdominal muscles go from fab to flab, as one Singaporean big eater recently found out.

In a close to seven-minute video clip shared on YouTube on Feb 14, the user, known as Zermatt Neo, gives the viewer a front-row seat as he ploughs through a large KFC meal. His efforts seem to a bid to participate in an online 10,000 calorie food challenge.

Neo's 'customised set meal' included 20 pieces of chicken, 24 nuggets, 12 Portugese egg tarts, eight cups of whipped potato and a 1.5 litre bottle of Pepsi. According to Neo, the total amount of calories come up to 10,316, which is almost triple the recommended calorie intake of an active 18-year-old teenager.

As reported on citizen journalism site Stomp, it truly is an amazing feat that he can even fit all that food into his slim and athletic body.

Neo manages to demolish the calorific meal, which occupies almost an entire coffee table, within 45 minutes.

After that, Neo shows the camera his bloated tummy and non-existent six-pack abs which was visible just an hour earlier.

Neo cheekily captioned the contrasting before and after photos, "6 pack abs - Gone in 60 minutes".