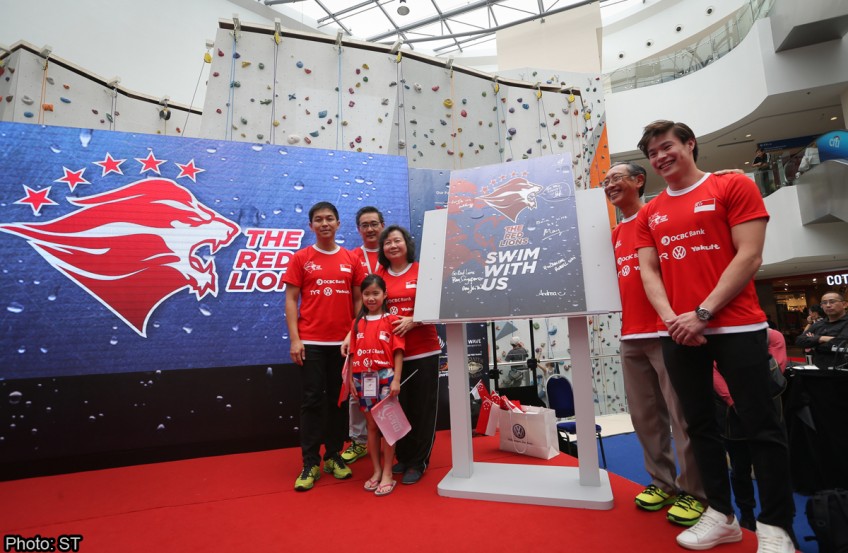 The Red Lions name surfaced at the Singapore Swimming Association’s rebranding launch attended by president Lee Kok Choy (left) and national swimmer Russell Ong on Saturday. But the SSA has since dropped the moniker because it is also used by the Singapore Armed Forces’ elite skydiving team.

THE Singapore Swimming Association (SSA) has begun its search for a new name for its national athletes following a short-lived rebranding exercise.

Launched last Saturday, it lasted just five days before it was dropped.

The name Red Lions will now be linked only to the Singapore Armed Forces' elite skydiving team while the SSA aims to unveil a different nickname as soon as possible.

It is understood that the Red Lions name was printed only on the billboard used during Saturday's launch and the 300 T-shirts the SSA distributed then.

Work on the revamp, which included an overhaul of its social media and online platforms, had begun in January with the SSA hiring a local creative and branding agency.

While the SSA declined to reveal the outlay of this marketing U-turn - which includes keeping the remaining apparel printed with the previous moniker in storage - the initial adoption of the Red Lions name had drawn flak from the public as well as past and present military men.

Said SSA vice-president (finance) Jose Raymond: "We will work with our athletes and relevant stakeholders to decide what name best identifies the values of our team."

Meanwhile, the public has begun to weigh in on what to call the Republic's elite aquatic athletes - swimmers, divers, water polo players and synchronised swimmers - with even Emeritus Senior Minister Goh Chok Tong offering his suggestion.

"Why not call them Sea Lions?" he wrote in a Facebook post yesterday. "After all, Singapore is surrounded by the sea and our swimmers aim to be champions in the coming SEA Games.

"Best wishes to our swimmers."

The use of a logo - represented by a lion and five stars - may still be retained depending on what new name is chosen.

The clash of names had not been well received by the Commandos Formation.

A meeting between the swimming body and representatives from the Ministry of Defence on Wednesday led to the decision to scrap the Red Lions name from the SSA's newly-launched identity.

Minister of Manpower Tan Chuan-Jin, who is also the Singapore National Olympic Council president and was the guest of honour at the rebranding launch, said in a statement to The Straits Times yesterday: "The national sports associations are independent and these are operational decisions taken by them.

"We respect the present position taken by the various parties concerned.

"More importantly, let us continue to strongly support our swimmers as they prepare for the upcoming SEA Games."

The SSA's key partners, including Yakult Singapore which last month signed a three-year, $350,000 sponsorship deal with the association, are doing just that.

Said Yakult's public relations and advertising manager Kuek Kok Ti: "This is a small hiccup and, as long-term partners, we will continue to support the SSA.

"The main thing, hopefully, is that the swimmers are not affected by all this."

Singapore will host the 28th SEA Games from June 5-16 with the national aquatics team expected to deliver a large number of the country's gold medals.