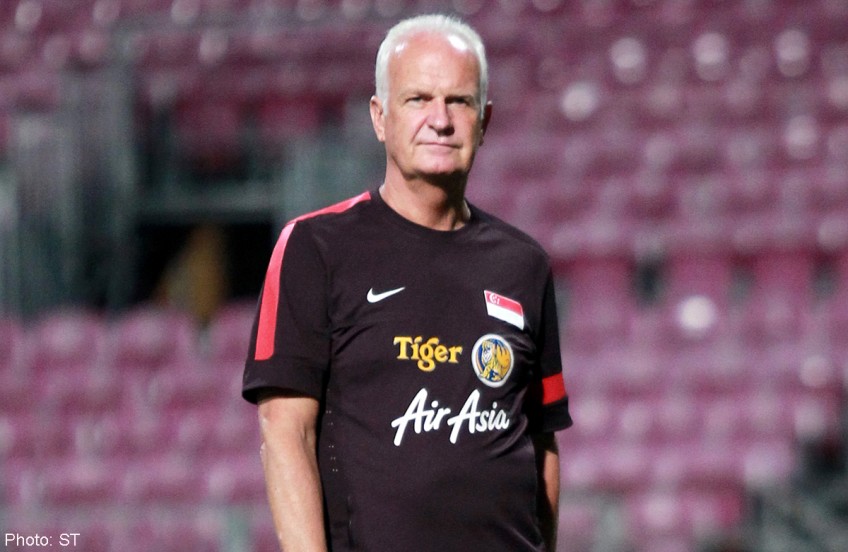 Singapore coach Bernd Stange’s (left) performance, as well aas those of his staff, will be reviewed after the SEA Games, while Briton Brian Eastick is one of five candidates for the technical director post, with incumbent Slobodan Pavkovic about to leave.

The Football Association of Singapore (FAS) has decided that, with the SEA Games just six months away, the German is needed to supervise national Under-23 coach Aide Iskandar and guide the side in their quest to land a first-ever football gold in the June 5-16 Games in Singapore.

Following a 3½-hour meeting yesterday morning to discuss the fate of the former Belarus and East Germany national coach, it said in a statement: "The performances of our national team coaching staff, including coach Bernd Stange, will be assessed following the 2015 SEA Games, which remain a priority for us."

It confirmed that Stange, whose original two-year contract expires in May, had already signed a three-month extension to his current deal in June.

Besides the SEA Games, FAS said that Stange will also be assessed in other key competitions including the 2018 World Cup Asian qualifiers and the Asian Football Confederation U-23 qualifiers for the 2016 Olympic Games, both of which begin in March.

Stange took on the head coaching job in 2013, following the stepping down of his predecessor Raddy Avramovic in December 2012 after leading the Lions to their fourth AFF Cup triumph.

It proved a tough act for the German to follow, and his position came under intense scrutiny after Singapore failed to reach the semi-finals following a 1-3 loss to arch-rivals Malaysia in their final group-stage match at the National Stadium.

They had earlier lost 1-2 to Thailand and beat Myanmar 4-2.

Questions about the 66-year-old's man management skills had also surfaced in the past month, as rumours of a split dressing room and alleged favouritism towards junior players have come to light.

Nevertheless, the coach said in the same statement: "I have taken the feedback from the management and the team seriously and will adopt key suggestions as we prepare for three key assignments in the next six months...

"I will learn from, and rectify, the mistakes we had made and aim to make our team stronger and better. I am fully focused on the next assignment."

However, with the FAS committed to contract negotiations with Stange only after the SEA Games, it risks being accused again of a lack of forward planning should it eventually opt to dispense with him.

Back in 2013, it had taken five months and a long and drawn-out process before settling on Stange as Avramovic's replacement.

Still, the FAS has shortlisted five candidates to replace outgoing technical director Slobodan Pavkovic, and will conclude its search by March.

The Straits Times understands that Nottingham Forest first-team coach Brian Eastick, 63, is among the five candidates - all Europeans - alongside a German and Frenchman.

Said FAS president Zainudin Nordin: "We spent the past few months looking for the best available person who will be a good fit with the local football environment.

"I am very pleased with the calibre and quality of the candidates who have applied for the position."