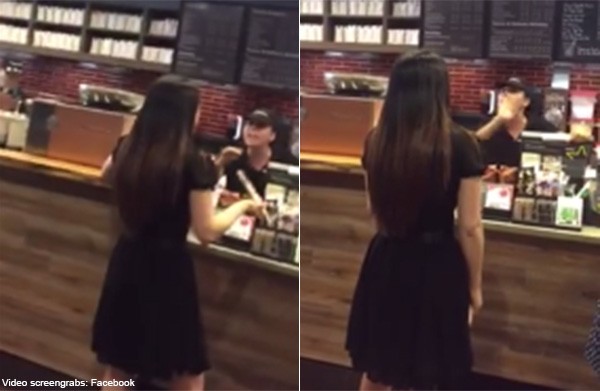 A Starbucks manager from New York was caught on video yelling loudly at a customer in a total "meltdown".

Pennapa Castro shared the May 12 incident on Facebook, which has now been viewed more than two million times.

In the video, the Starbucks staff was all-out screaming at a customer, later identified to be Ruby Chen.

The woman had allegedly "taken" a Starbucks cookie straw without paying for it - the straw costs US$0.99 (S$1.30).

"Are you calling me a thief?" she angrily counters.

Help to share this too much attitude at Starbuck on grand ave 86-51 Broadway elmhurst New York 11373 on Tuesday may 12th ,2015 her name is Melissa she called the cop and the cop told Chinese lady to complain online . She didn't act like manager and all the time she has high attitude to the customer

The Facebook description states that the cops were even called in, who told the woman to complain online.

Starbucks says the employee, Melissa, has since been fired.

"We take this issue seriously; this experience does not represent the high service standards we set for ourselves," the company said on its Facebook page. "This partner no longer works for Starbucks."

According to iDigitalTimes, Melissa says her side wasn't heard.

"She kept calling me names," the former Starbucks employee said, "and then she took the frappuccino straw and kept pointing it in my face, so I was already getting really upset."

"It was like a ticking time bomb for me.

"I have been disrespected by customers so many times. This is not the first time."