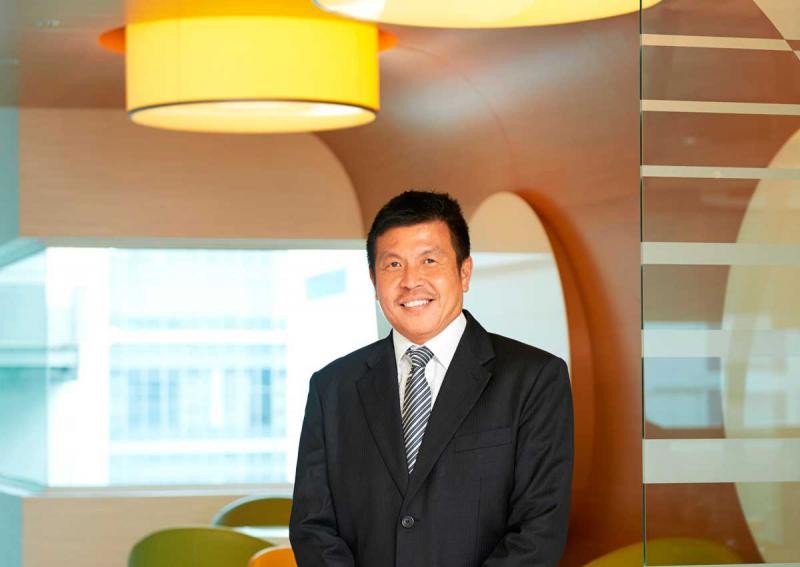 Ten months after his appointment as StarHub's chief financial officer, Dennis Chia finds he has grown into the role.

"Over the past 10 months, I've seen changes in the way I react to things - taking a few steps back to assess a situation and adjusting my approach to achieve the same results. I would definitely say I've gotten a little more patient too," he said reflectively.

The exposure to different responsibilities - ranging from internal audit and treasury to public listing as well as merger and acquisition negotiations - puts Mr Chia in good stead to face the challenges of the telecoms industry.

Singapore's third-largest telco listed on the Singapore Exchange's mainboard in October 2004. A year later, it overtook M1 to rank second place in the mobile market behind Singtel.

In the last 10 months, Mr Chia has worked hard to establish rapport with his team.His staff received "a drastic culture shock" when he came on board.

"I tend to be extremely pointed and unrelenting in my expectations of them," he said.

"But I have always articulated to them that this is a two-way street - I'm not trying to treat you like machines, but to get you to step up and show your continued relevance to the company."

He also brought in new talent.

Values dear to his heart include leading by example, full accountability and people-building.

Mr Chia also encourages his staff to take calculated risks. "The world won't wait for you, and certainly not your competitors."

And competition in the domestic market is certainly heating up, with Singapore's Infocomm Development Authority planning to auction additional mobile spectrum for use by a fourth carrier this year.

Bidding for the mobile spectrum will start in the third quarter and the licence is expected to be awarded thereafter.

SPANNER IN THE WORKS

The regulator has sought industry feedback since 2014 for a solution to meet burgeoning mobile data traffic in Singapore. As of January this year, Singapore had 3.6 million active social media users, representing a 64 per cent penetration rate, compared with 1.2 billion active social media users and a penetration rate of 29 per cent in the Asia-Pacific region, according to data compiled by creative agency We Are Social.

Meanwhile, regional mobile virtual network operator (MVNO) Liberty Wireless launched its Circles.Life cellular service in the city state two weeks ago. As it does not own network infrastructure, Liberty leases capacity from M1 at wholesale rates.

Given the industry's extremely capital-intensive nature, the fourth operator's ability to raise the requisite funding to compete effectively is uncertain.

When StarHub started operations, Singapore's mobile penetration rate was 48 per cent. It has now more than tripled to 148 per cent.

"The way for a fourth operator to generate financial returns on its investment is to take market share away from incumbents. It's inevitable that very intensive competition will be the result," Mr Chia said.

Currently, StarHub has 26.7 per cent share of the mobile domestic market, compared with 48.1 per cent for Singtel and 25.2 per cent for M1.

"At the time, we were not just focusing on taking market share away from Singtel or M1.

There was a logical rationale, and clearly a lot of value in awarding a third licence then - we generated value for customers and increased the penetration rate for mobile devices so the economy could benefit," Mr Chia said.

"I'm not quite sure I understand the need for a fourth operator in this current climate. In much larger markets with three or more operators, like Hong Kong and Japan, consolidation is taking place."

He expects the fourth operator's services to be restricted to mobile and broadband for consumers only, as it lacks relevant infrastructure to compete in pay TV or enterprise network services. The value it brings to the market would be through pricing.

"Whether you want to label it a price war or not - certainly it is an unpleasant term - the value-add is through accretive pricing at the onset. As the new kid on the block, it will not be able to offer anything better in terms of network quality," he said.

The real question is how long the new player can sustain that kind of pricing, and if it has the financial strength to do so, he added.

Mr Chia believes any disruption from the fourth operator will very likely be short-lived, although it could, inevitably, result in a protracted margin squeeze.

"It's not possible to sustain a business model at that level and continue to differentiate yourself. "

He added: "StarHub has a strong balance sheet and can ride out any headwinds for a time. We have built a war chest and will leverage on it when we need to."

StarHub aims to differentiate itself through excellent customer service and its "Hubbing" strategy, which provides bundling discounts for a range of services.

It will also continue to enhance its capability in enterprise service solutions, focusing on big data and analytics as a key growth driver.

While pay TV commands significantly lower margins compared with enterprise services, this segment continues to play an important part in its total offering to customers.

StarHub's partnership with film producer mm2 Asia also allows it to offer enhanced content, he added. The telco bought a 9.05 per cent stake in mm2 via a private placement in March.

StarHub also has an extra edge with its customer satisfaction scores beating the average of the three domestic players, Mr Chia said.

The telco scored between 0.6 and two points above the domestic average for its mobile telecom, pay TV and broadband services in the Customer Service Index of Singapore (CSISG) scorecard for the first quarter of 2015. The Index is jointly developed by Singapore Management University's Institute of Service Excellence and the Workforce Development Agency.

While StarHub's immediate focus has been and will continue to be in Singapore, it has forged global alliances to build and extract value, Mr Chia said.

It inked a strategic partnership with China Mobile in March to collaborate in various areas, including networks, devices and data.

"We will look at how we can export our capabilities outside Singapore to generate revenue, as well as acquire technologies being developed outside our home market to boost our competitive advantage."

Not surprisingly, rapid changes in the industry sometimes keep Mr Chia up at night. "I tend to worry about what the regulators might do tomorrow," he admitted.

But his basic philosophy in life is to take things in stride and deal with issues as and when they arise.

This is an edited excerpt from the Singapore Exchange's Kopi-C: The Company Brew column that features C-level executives of firms listed on SGX. A longer version can be found on SGX's My Gateway website: www.sgx.com/mygateway

This article was first published on May 23, 2016.
Get a copy of The Straits Times or go to straitstimes.com for more stories.