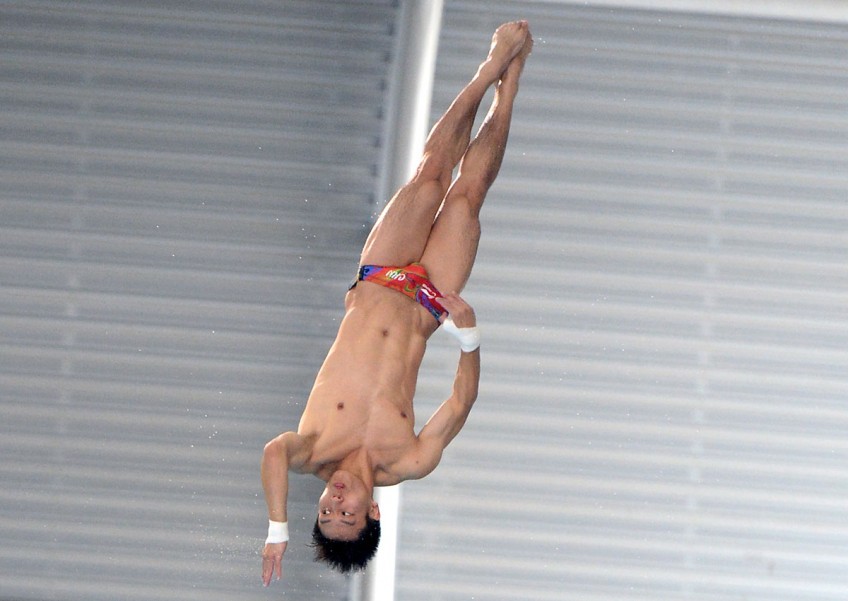 In the world of diving, few do it better than the Chinese, whose provincial divers - those who have yet to make it to the national team - showed that they are good enough to beat the best from other countries.

China stamped their authority on the Singapore leg of the Fina Diving Grand Prix as their divers won all four events on the final day at the OCBC Aquatic Centre yesterday.

Chinese divers Wang An Qi, who competes for Beijing, and Wu Chun Ting, who represents Guangdong, were the stars of the Singapore leg, each bagging three golds.

Wang teamed up with Ying Wang to win the mixed sychronised 10m with a five-jump score total of 312.60 points. Their quality was never in doubt as they built an unassailable lead with more difficult routines against Australian and Egyptian pairs.

On Friday, Wang, 23, had also teamed up with Gao Ang to clinch the men's synchronised 10m platform gold.

He then capped China's near-perfect outing with the 10m men's gold, scoring 478.45 after six mostly impressive dives, including a back three-and-a-half somersaults worth 93.60 points.

Still a long way to go

Not to be outdone, Chun Ting was peerless in the women's 3m final with a five-jump score total of 339.75. It was also her third gold, adding to the mixed sychronised 3m gold she and Li Ya Nan won on Friday and the women's synchronised 3m springboard gold she won with Xu Zhi Huan on Saturday.

The 18-year-old Chun Ting, who looks up to compatriot and four-time Olympic champion Wu Minxia, said: "I'm pleased to win three events, but my performances were ordinary.

"I can still improve on my temperament and the difficulty level of my dives. I have to work a lot harder if I want to fulfil my dreams of graduating from the provincial team to the national team and compete at the Olympics."

Indeed, despite the hundreds of young divers emerging from each Chinese province, there are only 20 to 30 spots up for grabs in the national team.

This is why China coach Wang Xiao Song feels that his charges still have a long way to go before they can become the best in the sport.

"The results are decent, but we did not face the best competitors. So we want to focus more on the process of competition and let our divers gain more experience," he said.

"There were still big errors in some of our dives, like you saw tonight with Xu Zhi Huan - one of our two national divers in this nine-man team - finishing last in the women's 3m final after a poor third jump.

"We still need to focus on our stability both in terms of psychology and technique.

"Different countries have different rates of improvement, but we are China and we focus on development for all age groups so that we can continue to produce a steady stream of world-class divers."