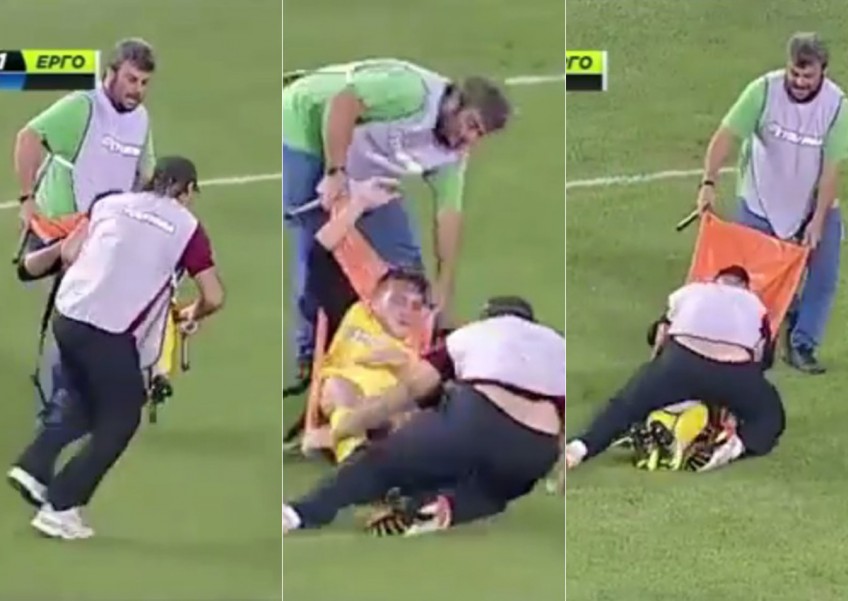 Hilarious video clips have emerged of a pair of stewards falling over and dropping an injured football player who they were trying to stretcher off the field.

Talk about rubbing salt to the wound and adding insult to injury.

The incident happened during a match last weekend in the Greek second division between Larisa and Ergotelis, according to online reports.

During the match, Ergotelis midfielder Leonardo Koutris suffered an injury and needed medical attention, prompting the team's physiotherapist and a pair of stewards to rush onto the pitch.

After a short consultation with the match referee, they then proceeded to try to stretcher the stricken player off the pitch safely.

First, one of the burly stewards roughly pushed the player onto the stretcher.

The pair then tried to take Koutris off the field of play quickly, only for one to trip and drop the player on to theground.

The steward got to his feet and picked up the stretcher again. But he lost his balance a second time, and worse still, fell over and landed right smack on top of the unfortunate footballer.

When they finally got the player on to the sidelines, they then simply dumped him to the ground with little care or concern for his well-being.

In the end, it was a bad day all round for the hapless Koutris, as his team suffered a 2-0 defeat in the match, reported Britain's The Guardian.