Student lauded for trying to save motorcyclist 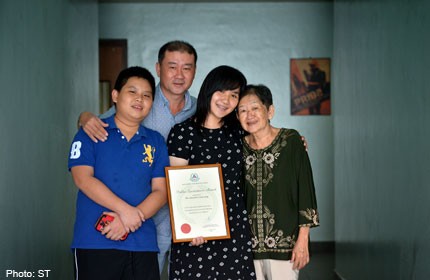 "I didn't think too much, I knew he needed my help and so I was concentrating on saving a life," said Ms Alessandra Connie Leong, a final-year nursing student at Ngee Ann Polytechnic.

The motorcyclist eventually died because of the injuries he sustained when he apparently skidded and crashed into a lamp post along Braddell Road.

"It was hard to accept that day and a few days later that he didn't survive, but my conscience is clear. I would've felt very guilty if I hadn't helped at all," she said, after receiving her award from Lieutenant-Colonel Alan Chow, head operations, 1st SCDF Division.

Lt-Col Chow said: "It is indeed a pleasure for us to present the Public Spiritedness Award to Alessandra, her unselfish actions and desire to help others are truly commendable and serves as a good example for others to emulate."

Ms Leong's father, brother and grandmother attended the award presentation on Wednesday. They said Ms Leong had always been grandma's little helper as a child.

"Her grandmother helped raise her from young, and even then Alessandra was always helping her out at home or with carrying heavy items," said her father, businessman Leong Fok Chai, 49.

"I'm proud of what she did, but was also a little worried about her safety as she was on the road when she performed CPR."

Ms Leong, who has done voluntary work through her polytechnic and at church, said that it was her grandmother, Madam Kwek Kah Ling, 74, who encouraged her to take up nursing as a career.

"She knew I liked to help people and told me to try for it. I enjoy it because I feel like I get to play a part in their lives," said Ms Leong, who will graduate next year. She will then start work at the Singapore Heart Centre.

She was on the way to school on July 23 and had just alighted at a bus stop when she saw the motorcyclist lying on the road. She rushed over and was among the first to arrive at the scene at around 7.40am.

Immediately, the nursing student checked for vital signs before carrying out CPR for between 10 and 15 minutes. The 38-year-old was eventually pronounced dead by paramedics after they arrived at about 8am.

Ms Leong said she was unfazed by online criticism. Some netizens had accused her for acting without knowing what kind of injuries had been sustained by the victim.

"I don't regret helping because I was trained and I knew what I was doing so it was okay," she said. "There's a joy and satisfaction that money can't buy from helping someone in need."

Proud of his sister's act, Ms Leong's 12-year-old brother Ivan even posted a picture of her on mobile app Instagram after he found out what had happened.