Students can get rewards for going greener via app 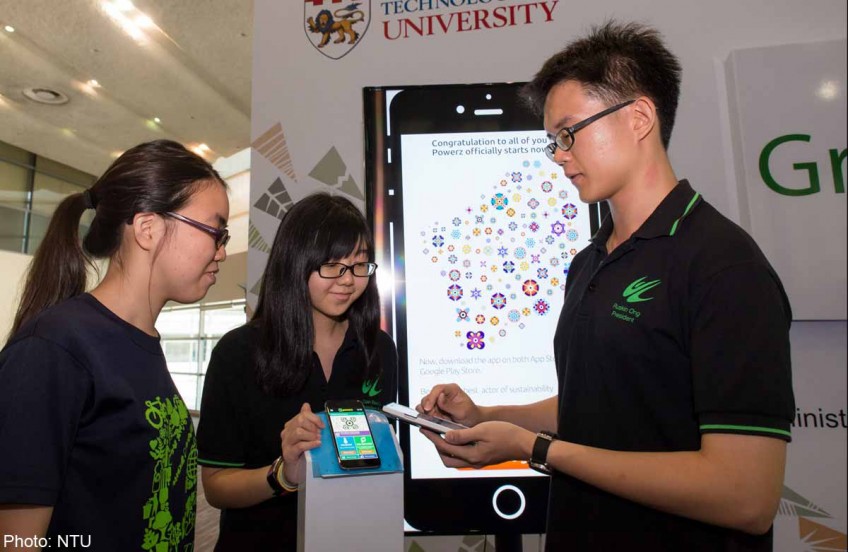 By using the university's newly launched eco-app to record their environmentally friendly habits, students can earn points to redeem prizes such as lucky draw coupons or food vouchers.

The app, named Powerz, was launched yesterday by Dr Vivian Balakrishnan, Minister for the Environment and Water Resources, at NTU's GreenFest 2015.

The virtual level is designed to be a massive multiplayer online role-playing game, where each player gets to customise his own avatar and score points through in-game quests.

For the actual level, students use the app to record environmentally friendly practices such as switching off lights when they are not in use, or using the stairs instead of lifts.

Inspiration for the app came after an NTU survey found that while many students care about saving energy, they did not know how to use it more efficiently.

The app will be tried out in a pilot until September this year, after which it will have its functions reviewed and improved on.

NTU aims to increase the number of users from the current 250 to more than 1,000.

This is so that the app will have sufficient users to give accurate and representative data.

The university said feedback for the app has been largely positive since its soft launch at the end of last month.

Mr Nilesh Jadhav, programme director of NTU's EcoCampus, estimated that the app can potentially help NTU use about 5 per cent less energy, leading to savings of about $2 million a year.

The electrical and electronic engineering student added: "Even if the actions are small ones, like switching off the lights and fans in a classroom, they do help to make a difference to the environment."

Virtual level: Players get to customise their own avatars and score points through in-game quests on the app's massive multiplayer online role-playing game.

Actual level: By using it to record environmentally friendly habits, students can earn points to redeem prizes such as food vouchers