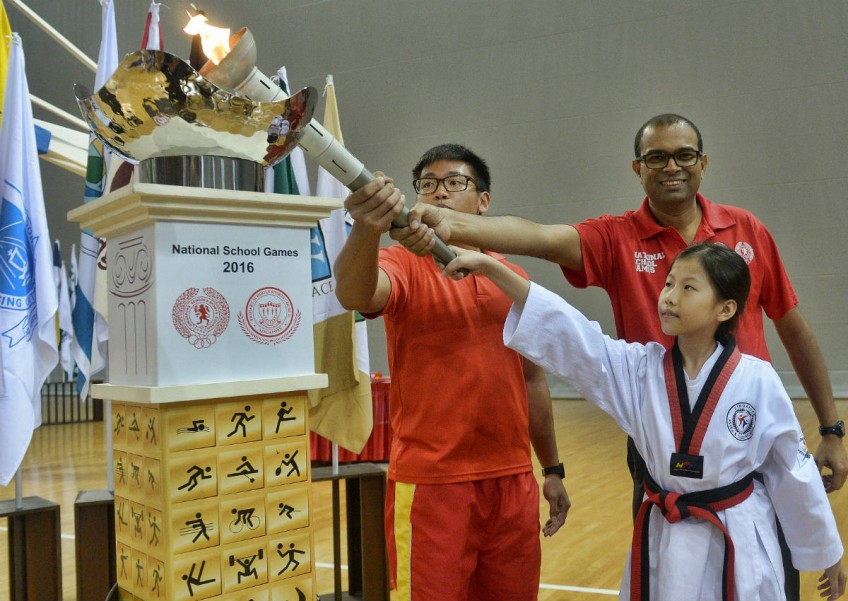 Minister of State for Education and Communications and Information Janil Puthucheary (center) lighting the cauldron with torch bearers Almanda Mik (right) and Eric Yee (left) at the Opening Ceremony of the 2016 National School Games yesterday.
ST

For the first time, the Sports Hub hosted the opening ceremony of the annual National School Games (NSG). And with the preliminary competitions of five sports - badminton, basketball, netball, volleyball and table tennis held concurrently at the facility yesterday, student athletes savoured the occasion and want more of the same next year.

The ceremony, attended by more than 1,000 students, officials and teachers, filled the halls at the OCBC Arena with plenty of buzz that enlivened what was otherwise, a quiet weekday afternoon.

This year, all the South Zone B Division basketball first-round matches will be played at the OCBC Arena, while last year's matches were played at Guangyang Secondary in Bishan.

Lim Shi Yew, a Bishan Park Secondary 3 cager, relished sharing the court with the Singapore Slingers, saying: "This court, the floor's friction and even the net are better than what we're normally used to."

His coach Sim Chee Keong added: "It's a more professional environment here. It makes them feel good and they will want to train harder to be better players.

"It gives them the idea that we are not outcasts, that Zone competitions are taken seriously too."

Dr Puthucheary told the students: "We are holding the opening ceremony and some games here, so that all of you can have a sense of your Sports Hub. We hope you enjoy it here and make it your space."

He added that some of this year's NSG's netball, badminton, swimming and water polo events will be held at the Sports Hub.

A Ministry of Education spokesman said that the ministry will identify "suitable facilities according to the needs of each sport, the availability of the venue as well as the efficiency of organising the competitions at the venues" for hosting future editions of the NSG.

Still, the students who had the chance to compete at the Sports Hub came away with their morale boosted.

Manjusri Secondary's Konishi Ryoma, who competes in the NSG's table tennis tournament is one such example.

The secondary four student said: "We feel closer to our idols, like as though we were the stars of the show today. It's a rare opportunity for us."

This article was first published on Jan 29, 2016.
Get a copy of The Straits Times or go to straitstimes.com for more stories.