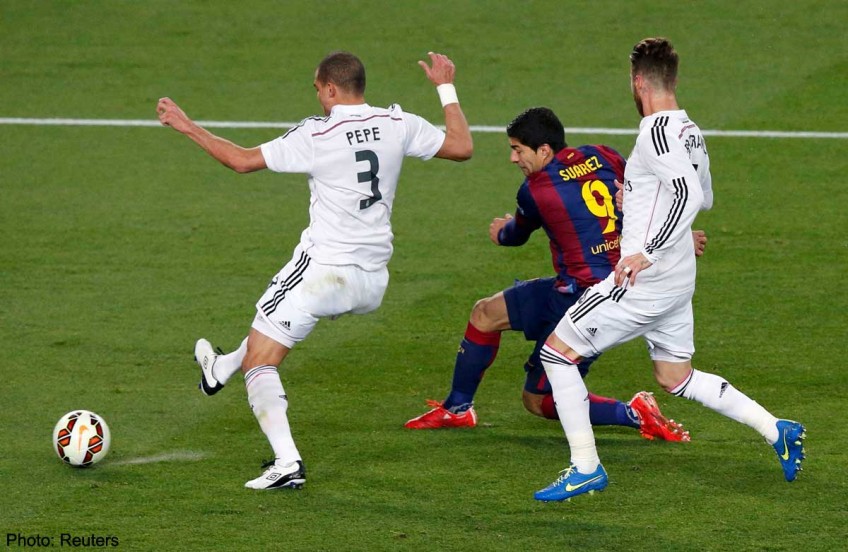 Luis Suarez and I are 10,913km apart, we’re divided by an ocean, we’re separated by value systems (I haven’t bitten anyone in four decades) and we’re operating on different calendars. It’s March 23 here, but it’s still March 22 where he’s playing. Either way it’s about to be his day.

Only the first second of a five-second goal is tedious. When the ball initially leaves Dani Alves’ boot, from his own half, in some part of the 56th minute, it brings a grimace. At 4am, this isn’t worth it.

If I want to watch humdrum and hopeful long balls making trips across the centre-line, I’ll go to the Premier League.

This is Barcelona, they’re football’s version of a Needlework & Handicrafts society. They’re like some fringe, non-violent, anti-long ball group in a warring society. They don’t hoof balls, they only thread passes.

But Barcelona, for parts of this Clasico, are flat and even Andres Iniesta, who could pick a lock with his brilliant toes, seems to have the shakes. Maybe the long ball is the only, ugly way, till Suarez turns it into something miraculous in his own small way.

Suarez sees the ball from Alves and he’s off and sprinting, and this isn’t so simple because he’s running while looking backwards, which in another setting might make him look like a thief trying to evade a descending superhero.

At Anfield, Juan Mata – who isn’t moving anywhere as fast as Suarez – leaps, twists, volleys a second goal against Liverpool. It is spectacular, as many airborne goals are, and it has one quality which Suarez needs. Timing.

The Barcelona player has to arrive at the plummeting Alves ball just in time. He has to gauge pace, envision the ball flight, calculate the defenders’ position and arrange his feet so that he catches the ball in his stride. On the right foot which is his right foot.

If this is difficult, then it is about to turn divine.

Athletes often use simple words as shorthand for complex subjects.

The first is “control” – of their emotions, the mind, the ball – and the second is “feel” which is a state of mind but also refers to an acutely sensitive hand-eye coordination. Marry them neatly together and you get precision and invention.

John McEnroe, once likened to a “stiletto” by Arthur Ashe, seemed to commune with the ball rather than just play it. Seve Ballesteros, the imaginative golfer, who hit shots on his knees and from car parks, could have won tournaments using a walking stick and an umbrella.

Our admiration of these men is born partially of envy: As much as we are awed by power in modern times, it is delicacy of touch, which eludes the amateur, that we revere.

For instance, what Suarez is about do with his feet in Europe on Sunday, Novak Djokovic does with his racket in America at the same time.

Early in the third set at Indian Wells, Roger Federer slices a drop shot that lands in Djokovic’s forehand court, abruptly stops as if urgently commanded to and jerks sideways with the spin.

The Serb, who has just hit a backhand from behind his baseline, comes racing diagonally across the court. As the drop shot starts to die, he slides his feet towards the ball and his racket underneath it. Federer is at the net, covering every conceivable angle, blocking every possible space.

But Suarez is even more astonishing. Djokovic, after all, is unmolested, no one is trying to jostle his arm as he flicks his shot. But Suarez is being chaperoned closely enough by two Real Madrid players to know their preferred deodorant.

And yet, amid all this, as the ball descends onto his right boot, it collapses perfectly. It doesn’t hit his boot and bounce too much nor does it roll too far. It is as if his boot is encased in a silk glove and you could throw a crystal vase at him this day and he’d catch it gently with his instep.

Suarez’s touch isn’t always so exquisite, he’s more a straight-forward sniper than a poet, yet this day he writes verse. It is unflamboyant yet unerring, it is not an elaborate masterpiece but a simple classic. The ball lands, it is controlled, it is swept in.

And then, as he kneels and celebrates in the corner, he looks – as many goal-scorers do – as if he’s suddenly remembered what it means to be alive.

After five seconds of perfect control, Luis Suarez finally tells us how he feels.