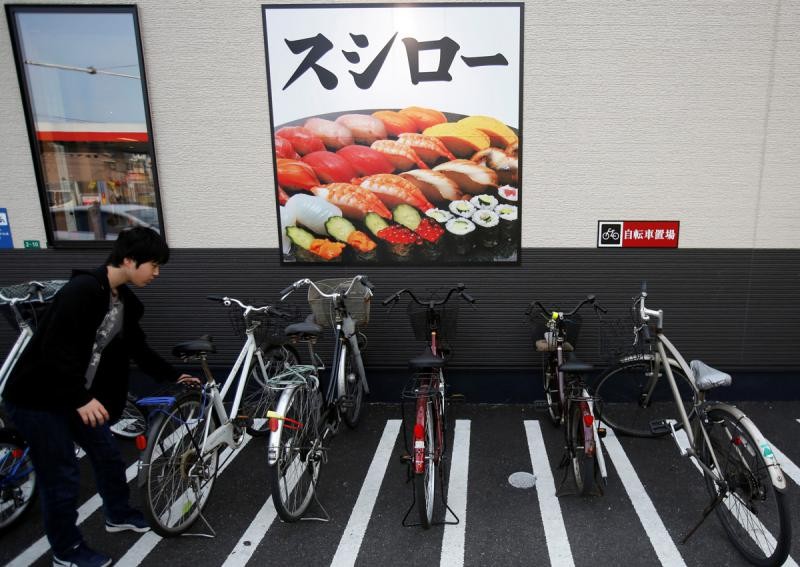 TOKYO - Japanese consumers can't get enough of cup noodles, with spending on them surging by more than a quarter over the past year.

That sounds like good news, but for a country still struggling to escape deflation it's a worrying signal.

Weak consumer spending is fuelling speculation that Prime Minister Shinzo Abe will again delay a planned sales tax hike, and Japan is expected to have dodged a recession at the start of this year by the smallest of margins - helped by an extra 'leap year' day in the January-March quarter.

Consumption, one of the few economic engines that fired when Abe launched his "Abenomics" stimulus plan more than three years ago, is faltering.

And rising sales of cheap cup noodles is a worrying sign that consumers have little confidence that deflation is being banished.

"Consumers remain on guard against rising costs of food and living, refraining from spending on other items, and they're rebuilding savings spent during the last-minute buying spree," said Hiromichi Shirakawa, chief economist at Credit Suisse.

Spending on noodles is growing at the fastest pace since Abe took office in late 2012.

At the same time, data shows households are spending less on non-durable goods such as utilities, education, recreation, transport and communications.

With private consumption accounting for roughly 60 per cent of the economy, this renewed frugality is a signal that Japanese policymakers could struggle with yet another year of disappointing growth and low inflation.

Policymakers are worried. Bank of Japan Governor Haruhiko Kuroda said this month that weakness is starting to show up in consumer spending, but he expects a tight labour market to support household spending in the future.

In March, the government lowered its assessment of private consumption due to falling spending and weakening consumer sentiment.

Data on Wednesday is forecast to show the economy grew at an annualised rate of just 0.2 per cent in January-March, after an annualised 1.1 per cent contraction at the end of 2015 - avoiding recession with the help of an extra day from the leap year to boost the numbers.

Those sort of numbers are feeding expectations that Abe will put on hold a plan to raise the sales tax hike to 10 per cent from 8 per cent next April, although the government's top spokesman denied a weekend report to that effect in the Nikkei paper.

The planned increase has already been delayed once after an increase to 8 per cent from 5 per cent in April 2014 hit consumption and knocked the economy into recession.

When Abe launched his administration with bold promises to shake Japan from its deflationary torpor, consumer sentiment surged and shoppers splashed out on big-ticket items.

But now, opinion polls show a majority of voters are losing faith in "Abenomics", as well as in the BOJ's radical monetary stimulus, and consumer sentiment is weakening.

The main reason for the weak rebound in consumer spending is sluggish wages, with nominal wages lagging broad price rises caused by the 2014 sales tax hike.

Price-adjusted real wages have fallen for the past four years. They look to have started to pick up gradually since last summer, due mainly to slowing inflation reflecting lower oil prices.

While household spending among high-income earners has held steady after the sales tax hike, lower-income households have reined in spending.

"People quickly realised that recent wage gains were not likely to continue, and higher food prices put a lot of pressure on the household budget," said Norio Miyagawa, senior economist at Mizuho Securities.

"Given the volatility in overseas economies, I expect consumers to cut spending further. This will limit gains in consumer prices."

And big Japanese manufacturers have offered much smaller pay rises this year as their profits are squeezed by slowing demand at home and abroad, and a stronger yen.