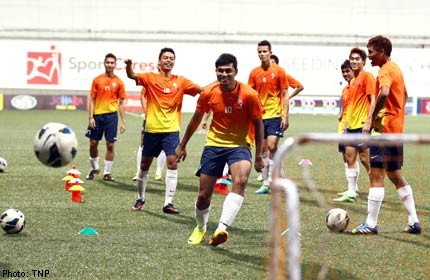 SINGAPORE - Four months ago, soon after the LionsXII defeated ATM 3-1 at the Jalan Besar Stadium, coach V Sundramoorthy knew exactly what it would take to win the Malaysian Super League (MSL) title.

He said: Win all our home matches and we will be there at the end of the season.

His words were almost prophetic, as his young charges dropped only two points at home against Johor Darul Takzim, en route to lifting the MSL trophy.

A day before the Singapore side kick off their Malaysia Cup campaign by hosting Kedah, the 47-year-old coach was again confident that his team could go all the way to the final on Nov 3.

Only if they stay perfect at home.

"It makes sense, doesn't it? We have to take advantage of our home (artificial) pitch and fans," Sundram said.

"Three home wins will give us nine points, and if we get a result on the road, I think we will make it out of the group.

"Hopefully, from there, we will continue to win at home and progress even further."

The LionsXII are drawn in Group D with Kedah, Sarawak and Perak, as they pursue the dream of capturing the Malaysian league and cup Double - a feat achieved by the famous Singapore side of 1994.

"It's all we are thinking about," said team captain Shahril Ishak.

"Winning the MSL was great, but to win the Malaysia Cup as well would truly be something special.

"To do that, I agree we have to be perfect at home.

"Playing in front of a packed Jalan Besar (Stadium) always spurs us on. We always have the desire to win on this ground in front of our fans."

As the league champions, the Singapore side will enter the Malaysia Cup as one of the favourites.

The LionsXII will not be at full strength against second-tier Malaysian Premier League side Kedah, however, with centre back Safuwan Baharudin suspended.

Shakir Hamzah, who recently recovered from a knee injury, is set to deputise in the centre of defence with Baihakki Khaizan.

Sundram has spent much time warning his team against complacency, especially as Kedah are the only Malaysian team the LionsXII have not beaten.

Last year, the Singapore side drew 0-0 in Alor Star before squandering a two-goal lead to draw 3-3 at home.

"I does not matter if we are one of the favourites," said former Kedah star Sundram.

"This Malaysia Cup is a short tournament, and any team on form can go all the way.

"Last year, two Premier League sides (Pahang and ATM) made it to the last eight. This year, it can be Kedah or Sarawak.

"(Tonight) will be a chance for us to set our record straight against Kedah."

Midfielder Isa Halim said that Malaysian teams will be further motivated to restore some pride after the LionsXII won the MSL title.

"Teams will naturally be driven to beat the champions. We cannot be intimidated by this, we have to stay composed," he said.

"Plus, the Malaysia Cup has always been so prestigious for Malaysian teams.

"Say what you want about Kedah being in the second tier, I still think they are a powerhouse and we musn't lose focus.

"We can't afford to drop any points at home."

For the first time this season, the LionsXII boasted a full repertoire of firepower in training.

At the Jalan Besar Stadium on Monday, 24 hours before the Singapore side kicked off their Malaysia Cup campaign against Kedah, coach V Sundramoorthy had a healthy platter of four strikers to select from.

Fazrul Nawaz, Shahfiq Ghani, Khairul Nizam and Syafiq Zainal were all injury-free and were on display as the probables took on the possibles during the tail-end of the 90-minute session.

"Shahfiq Ghani is in good form and can offer us a lot when he comes on.

"Even Syafiq Zainal has been training well."

Despite having four strikers at his disposal, the sole starting spot up front will go to Fazrul.

The 28-year-old has been ever-present in the starting line-up for the Malaysian Super League (MSL) champions this season.

Though the former Warriors striker hasn't been at his scoring best the past eight months - notching just five goals in 22 games - it is his high work-rate that has impressed the Dazzler.

"He never stops running, and is an opportunist in the penalty box," Sundram explained.

"Fazrul can get the odd goal for us because he puts himself about up front."

The affable Fazrul, the S-League's top local scorer in 2011 and 2012 (15 and nine respectively), sees himself as a team player.

"Teamwork is important. The players know I will work for the team and I will run until I can't run," he said.

"Scoring is not all that matters, because we have many players who can do that. But I'm feeling good at the moment. I'm ready to go."

Fazrul added that he was fully aware of a promise he made to himself before the season began.

He announced a target of 10 goals soon after he was signed by Sundram as the fifth and final senior (over 23 years) player in the squad.

"I have five already, so five more to go. I will keep that promise," Fazrul said.

"There's no better time to complete that target than the Malaysia Cup.

"Everyone is talking about Sundram leaving the team at the end of the season.

"If he does go, I would love to repay his faith in me by helping the team win the Cup.

"It would be a perfect goodbye present for him."