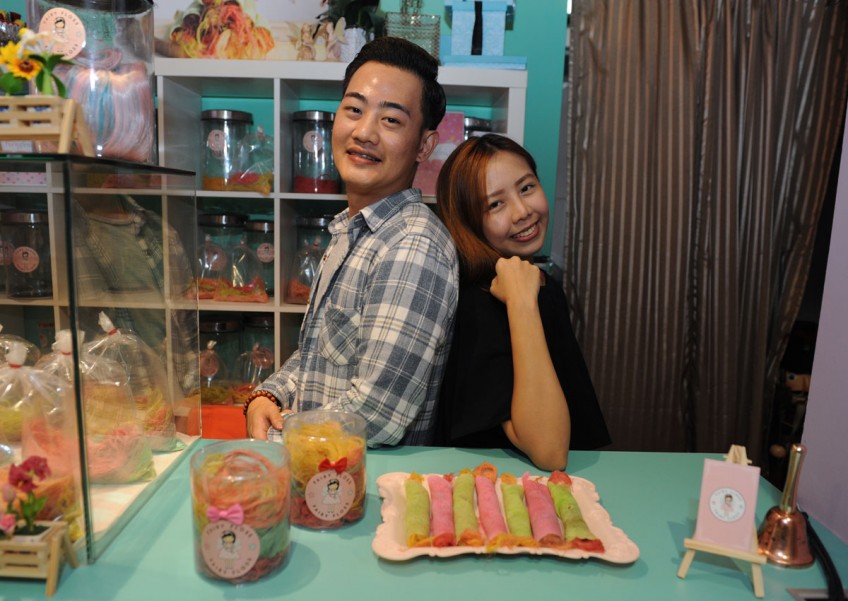 Roti sai mai, a Thai street snack from Ayutthaya in Central Thailand, may look like it consists of strands of hair rolled in a crepe, but do not scoff at it, for it is a popular snack across the country.

And now Singaporeans can get a taste of it at Fairyfloss, a store in Singapore which opened last December, offering the snack.

It sells seven flavours of brightly hued candy floss, such as banana, strawberry and blueberry, which are wrapped in lightly salted pandan- flavoured crepes.

Prices start at $12.90 for 10 crepes and a 150g packet of floss in two flavours and customers roll the crepes themselves.

The floss is made in-house daily by Fairyfloss co-owner Edwin Phng, 26, who spins and twirls a mixture of melted sugar, oil and flour by hand, stretching it until it forms hair-like strands. Each batch takes an hour to make.

Fairyfloss co-owner Carilyn Ho, 23, and Mr Phng visited Ayutthaya more than five times last year to learn how to make the snack from stall vendors there.

Ms Ho was introduced to the snack by her Thai cousin and was fascinated by the silky hair-like texture of the candy floss.

She says: "We feel Singaporeans will be attracted to this unique combination of candy floss and crepes."

Fairyfloss sells 50 to 60 sets of crepe and candy floss a day and is opening a second shop in Bugis Village next Sunday.

In Thailand, brands are modernising the snack by offering more flavours of candy floss and crepes in fancy packaging.

One popular name in Thailand is Candy Crepe, which has two outlets in Bangkok.

It was started by former business consultant Jainnisa Kuvinichkul, 36, who bought the recipe for roti sai mai from a popular 35-year-old stall in Ayutthaya and tweaked it to create new candy floss flavours including Thai tea, charcoal, matcha and Thai mango.

Candy Crepe sells a few thousand sets of crepes each month and tourists from Singapore make up half of its overseas customers.

Ms Kuvinichkul also takes e-mail orders from Singapore customers through its website www.candy crepe.com/en. She visits Singapore every two months to make delivery. Prices vary depending on the flavour ordered.

She hopes to open an outlet in Singapore by the end of the year.

Candy Crepe will hold its first roadshow at Thai Festival 2016 at the Royal Thai Embassy in Orchard Road from Thursday to next Sunday. It will sell bags of freshly made pandan crepes with mango- flavoured candy floss at $30 a set.

I See I See

A recent newcomer in the iced desserts scene is I See I See, an ice pop brand from Hong Kong, which opened its first overseas outlet here in March this year.

The takeaway kiosk at 313@Somerset offers more than 12 flavours of ice pops that are made with fruit juices and milk and creatively decorated with fruit and nuts.

I See I See's ice pops have a feathery, snow-like texture instead of larger, coarser ice crystals because they are made using a quick-freeze method.

The founder of I See I See, Ms Candice Yung, chose to go into the ice popsicles business after leaving the legal industry.

She says: "I wanted to create a product which will put a smile on people's faces."

She adds that the hot weather in Singapore makes opening an outlet here a natural choice.

I See I See has five outlets in Hong Kong and hopes to open at least five here.

She and her team create new flavours regularly based on fruit that are in season. Some flavours include Chilli Mango ($6.90), Refreshing Kiwi ($5.90) and a mocktail- inspired Virgin Mojito ($6.90).

Each ice pop comes with a colourful takeaway cup with quirky quotes.

Ms Yung says: "It is all about the little things and I want to bring happiness to people."

He spent a decade as a sushi chef in his family's restaurant in Japan's Miyazaki Prefecture, but Mr Koji Muraoka has such a soft spot for pancakes that he decided to open a pancake cafe.

The 46-year-old's love of pancakes stems from his vivid memories of his mother cooking pancakes for him. Highlights of trips to department stores as a child also revolved around pancake meals in restaurants.

In 2012, he started Kyushu Pancake Cafe in Tokyo, which has since expanded to eight outlets in Japan and two in Taiwan. It will open its first outlet in Singapore on May 11. Flavours popular at Kyushu Pancake's outlets include Berrylicious, pancakes topped with strawberries, blueberries, cranberries and vanilla ice-cream; and Matcha Montblanc, which comes with matcha-dusted chestnut puree.

Here, Kyushu Pancake's 42-seat cafe will serve more than 20 types of sweet and savoury pancakes, waffles and French toast, all made with the in-house pancake mix. A main course and a drink will cost $20 to $23 a person.

Mr Muraoka, who is the president and chief executive of Ippei Group, which also owns Japanese eateries and coffee houses, is partnering a home-grown food and beverage company, Midori Capital, here.

Unlike the fluffy and light pancakes offered by other eateries, the ones at Kyushu Pancake Cafe are chewy and have a denser texture.

They are made using Kyushu Pancake Cafe's proprietary pancake mix, which comprises seven grains - wheat flour, sprouted brown rice, millet, pressed barley, purple and black glutinous rice and white rice - one type of grain from each of the seven prefectures in Kyushu, where Mr Muraoka grew up.

He came up with the recipe after spending 18 months experimenting with more than 20 types of organic grains. He says: "These grains give the pancakes a natural, sweet fragrance and taste."

The pancake mix is sold in supermarkets across Japan and it will go on sale at the cafe in Singapore as well. A 200g packet will cost $7 to $8.

In Taipei, Kyushu Pancake Cafe has made such waves that diners need to make reservations up to three months in advance.

When asked if he anticipated the same results here, Mr Muraoka says with a laugh: "I do not like to make people wait." A new variety of pancakes has made an appearance in Singapore - German-style Dutch Baby pancakes which are not pan-fried but baked in cast iron pans, resulting in pancakes with thin crispy edges and a softer core.

And for a taste of these, head to Dutch Baby Cafe, a 46-seat cafe in Paragon which opened last month.

Mr Takahashi Kenichi, 60, its executive chairman and chief executive officer, says Dutch Baby pancakes, which are still trendy in Tokyo, are an extension of the pancake craze that gripped Japan a few years ago.

He adds: "I am always on the look out for fresh concepts to bring in so that diners here can have a slice of Japanese culture."

He believes that the "interesting contrast of textures" between the crispy edges of the Dutch Baby pancakes and their soft centre will be well received here.

The pancakes are made to order and require a 15-minute waiting time. Mr Kenichi says that the flour, which is imported from Japan, gives the pancakes a smoother texture. The cafe sells 30 to 50 pancakes daily.

Adds Mr Kenichi: "Singapore diners like confections that are nicely decorated with fruit. With the Dutch baby pancakes, I can offer them another type of dessert with fruit on it."

Open: Noon to 9pm (Monday and Wednesday to Sunday), closed on Tuesday Choux puffs are usually stuffed with fillings such as chocolate and vanilla cream, but the choux pastries from Ollella, a month-old cafe in Petain Road, get much fancier than that.

The choux pastries there are coated with crunchy biscuit-like craquelin and come with unusual fillings.

A regular 5cm-wide choux pastry costs $4 to $5. There are also choux tarts (from $32) that are adorned with globes of choux pastries.

The dainty treats at Ollela are the brainchild of her sister Ollyvia, 24, who worked as a pastry cook at The Peninsula Chicago Hotel in the United States and took up a three-month attachment at the famed patisserie Pierre Herme in Paris last year.

Swept up by the eclair craze in France two years ago, the sisters had wanted to open an eclair shop, but changed their minds as some dessert shops here started to specialise in them.

Ms Ollyvia spent eight months thinking of how to revamp the choux pastry.

The sisters, who have Indonesian parentage, also offer a 20-layer Kue Lapis Legit (from $38 for a 600g block), which is made using their grandmother's recipe. It is sold only on Wednesdays.

Ms Marcella says opening a pastry shop has been a dream come true.

"I had been living my pastry dreams through my sister, but now, I can also live my dreams."