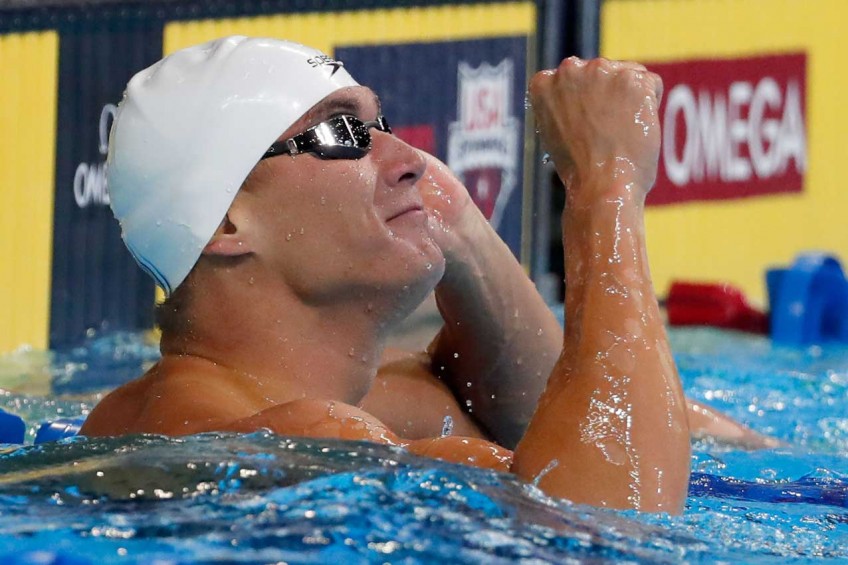 Nathan Adrian of the United States celebrates after winning the final heat for the Men's 100 Meter Freestyle during Day Five of the 2016 U.S. Olympic Team Swimming Trials at CenturyLink Center on June 30, 2016 in Omaha, Nebraska.
Getty Images North America

OMAHA, United States - Nathan Adrian stormed home to win the 100 metre freestyle at the US Olympic swimming trials punching his ticket to Rio where he'll go for a second straight gold.

The 27-year-old Adrian was just one veteran in the spotlight Thursday as superstar Michael Phelps and Ryan Lochte lined up a tantalizing 200m individual medley clash with semi-final victories.

Phelps comfortably won the first semi in 1:57.61. Lochte followed with a 1:56.71 that makes him the second-fastest in the world this year.

"It's going to be good," Phelps predicted of Friday's final. "You'll have an exciting race." Phelps will be gunning to add the 200m medley to a Rio slate that already includes the 200m butterfly.

Lochte, meanwhile, will be in search of a first individual Rio berth as he and Phelps add another chapter to a rivalry more than a decade old.

"It's one of the greatest rivalries in sports," said Lochte, who owns the world record and 2015 world title in the 200 IM, but has settled for two silvers and a bronze in behind gold medalist Phelps in three Olympics.

Adrian, who beat Australian James Magnussen to the 100m free gold in London by one one-hundredth of a second, hadn't cracked 48 seconds since 2013.

Now that he's done it twice in as many days, he's looking forward to taking on another Aussie challenger in McEvoy.

"I just look forward to racing him," Adrian said. "There is nothing more fun than getting the best guys in the world together in the same pool and just seeing what happens." Caeleb Dressel, a double freestyle sprint gold medalist at the NCAA collegiate championships, seized second in 48.23, booking an individual berth in Rio as he edged another collegiate standout, Ryan Held, who settled for third in 48.26.

Held nabbed a trip to Rio as part of the relay pool, as did fourth-placed Anthony Ervin - who earned a third Olympic appearance 16 years after he won gold in the 50m free in 2000.

Josh Prenot poured it on in the back half to win the 200m breaststroke in 2:07.17 - becoming the second-fastest performer all-time behind Japan's Akihiro Yamaguchi - who holds the current world record of 2:07.01.

Prenot, who missed out on a Rio berth in the 100m breaststroke with a third place finish behind Cordes and Cody Miller, was fourth at the halfway mark as Cordes set a blistering pace.

Cordes was still leading at the final turn, with Prenot in second and both under world record pace and it was Prenot who powered home for the win with Cordes second in 2:08.00.

"That is by far the most perfectly I've ever put it together," said Prenot. "So I'm just going to be working on putting another good race together in Rio." World championships silver medalist Cammile Adams won the 200m butterfly to line up another Olympic shot in the event in which she finished fifth in London.

Adams, rattled by a disqualification that was overturned on video review in the heats, clocked 2:06.80 with Hali Flickinger second in 2:07.50.

Elsewhere in the semi-finals, Abbey Weitzeil led the times in the women's 100m free in 53.57sec.

Katie Ledecky, winner of the 200m and 400m free already this week and a virtual certainty to punch her ticket to Rio in the 800m free, made the final in the less familiar sprint with the seventh-fastest time, while Missy Franklin failed to advance.

Franklin finished 11th-fastest. She'll have a chance to qualify in a second individual event, after punching her ticket with a runner-up finish in the 200m free, in the 200m backstroke.

"That speed just doesn't feel like it's quite there this meet," said Franklin, who also came up short in the 100m backstroke. "No idea why."