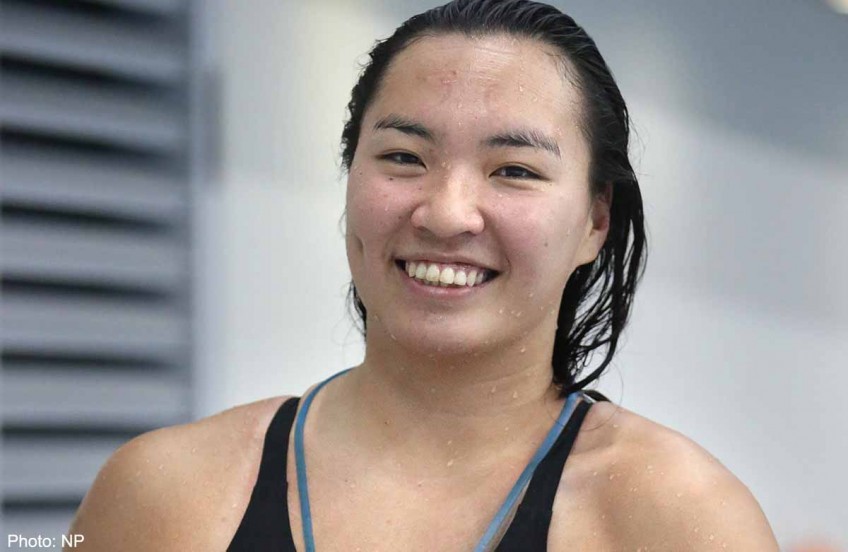 She made her South-east Asia (SEA) Games debut in Laos in 2009 and, after three editions, Roanne Ho is still searching for her first individual gold medal at the biennial meet.

There is no better time and stage for the 23-year-old to break her duck than on home soil this June at the 28th SEA Games, which she says will be her last.

Ho signalled her intentions at the Singapura Finance Singapore National Age Group Swimming Championships (Seniors) yesterday when she won the women's 50m backstroke final in 32.50sec, just 13 hundredths of a second outside her national record of 32.37 set last year.

If the Swimfast Aquatic Club swimmer sets a new mark at this year's SEA Games, it would be comfortably under Malaysian Christina Loh's meet record of 32.49.

Speaking after her swim at the OCBC Aquatic Centre, Ho told The New Paper: "I was looking to break the national record tonight and I'm a little disappointed because I was so close.

"But I still improved on my time at last year's Asian Games, so that's good.

"I won a silver in the 100m breaststroke and a gold in the medley relay in 2009 (there was no 50m breaststroke event then), and I quit swimming after that because of studies and I thought I was done with swimming. "I came back in 2013 because I wanted to swim in the SEA Games at home and I feel like I'm ready.

"Hopefully, I can set a new national record and win my first individual gold at home, that would be the perfect end to my SEA Games adventure.

"I will see how I do at the SEA Games before I decide whether to try and qualify for the Olympics. After all, I'm already 23 and I have to plan for my life after swimming."

She explained: "A lot of his training with me is on mental strength and he always tells me, believe and nothing is impossible.

"My performance tonight could be better in terms of my dive and underwater strokes, but Sergio taught me to give credit to every performance and I will continue to stay positive."

Lopez insists there is no problem in motivating the athlete, especially when she knows this SEA Games will be her last.

He said: "Ro is ready to swim faster, I don't have to motivate her at all. She knows what she wants and what she needs to do to achieve that.

"If it's her last SEA Games, she will definitely go all out."

In the other finals last night, Quah Zheng Wen continued his red-hot streak and proved himself to be potentially one of the big stars in June when he won the men's 50m butterfly and 200m individual medley finals in meet record times of 24.64sec and 2:03.38sec, respectively.

I came back in 2013 because I wanted to swim in the SEA Games at home and I feel like I'm ready.