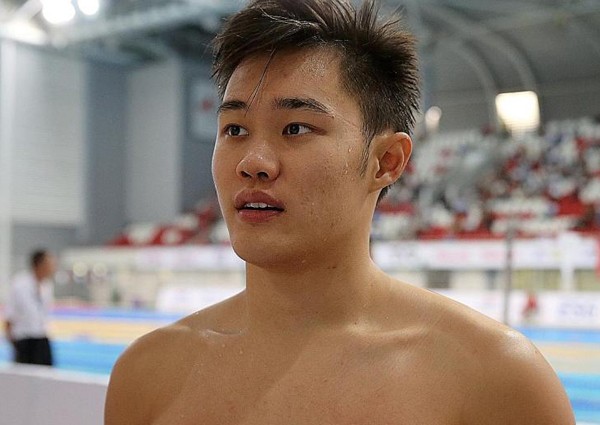 He trained just once last year, after enlisting for full-time National Service with the Police Coast Guard.

With the blessings from his unit, Teong Tzen Wei returned to training with former national swimmer Richard Chng at the AquaTech Swimming club after the Singapore Swimming Association (SSA) time trials in January, albeit just six times a week compared to double that number for most elite swimmers here.

But, last night, the 20-year-old beat all-comers to win the men's 50m freestyle at the China Life Singapore National Age-Group (Seniors) Swimming Championships at the OCBC Aquatic Centre, in a time of 22.93sec.

However, each country can send only two swimmers for each individual event at the Games.

Teong said: "I feel good, but I think I can get a better time. There's room for improvement.

"I am very happy (to make the SEA Games cut), but I don't think I can be too proud of myself, just because I hadn't been training much.

"Yes, there's a bit of talent at play, but I have to work hard if I want to get the gold medal at the SEA Games."

A visibly happy Chng attributed Teong's performance yesterday to the club's training and his mindset.

Chng said: "It has been drilled into his mind that he cannot afford to miscalculate, or take things for granted.

"There's always room for improvement and leading up to the major competitions we really have to sit down and think it through.

"But he has been very consistent and focused this year, and if he continues to be very focused on the little things and his processes, he will be there."

However, while the ongoing meet is the last SEA Games qualifier, overseas-based swimmers such as Joseph Schooling, who won the men's 50m free in the 2015 Games, and Quah Zheng Wen are allowed to nominate one sanctioned meet for their times.

Ching Hwee said: "I was struggling with my breath and was two seconds off my personal-best split during the backstroke leg in the morning, but went faster in the breaststroke leg thereafter."

But, the Methodist Girls' School student, who also qualified for the women's 400m free on Tuesday, said she did better last evening after working on coach Eugene Chia's pointers.

Asked how she felt about going to the SEA Games, Ching Hwee said: "I am quite excited about it, but my main focus right now would be my three events in the next three days."

This article was first published on Mar 17, 2017.
Get The New Paper for more stories.