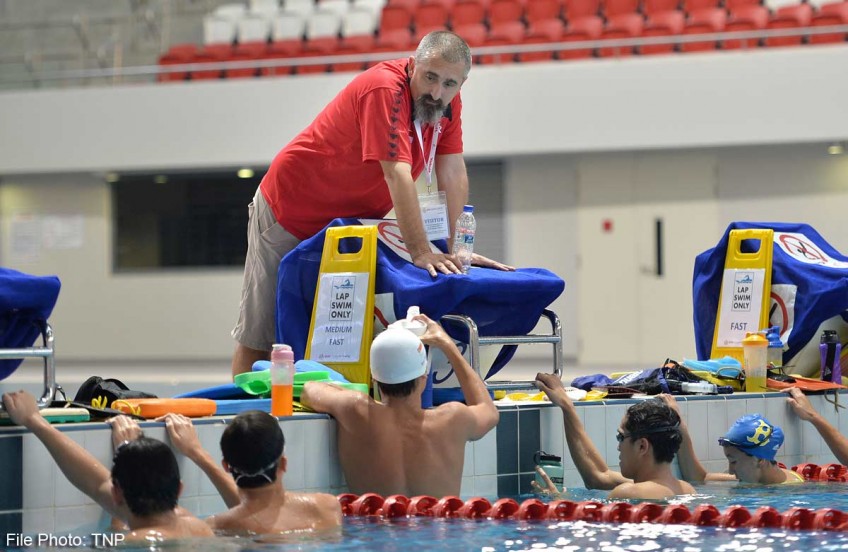 Swimming national coach Sergio Lopez is a man in the business of numbers, from training reps, to volume, yardage to timings.

Yet, the 46-year-old Spaniard is adamant he will not set a medal target for the upcoming South-east Asia (SEA) Games in Singapore from June 5 and 16.

"I don't have a number as a KPI (key performance indicator) yet," said Lopez, who spoke to The New Paper at the Singapore Swimming Association's (SSA) office at the OCBC Aquatic Centre yesterday.

After a long stint as Joseph Schooling's guide at Florida's Bolles School, Lopez was hired by the SSA and began work as national coach here in January.

He acknowledged that the Republic can "win many medals" if the likes of Schooling, siblings Quah Ting Wen and Zheng Wen, Amanda Lim, Tao Li and Danny Yeo perform to their potential.

Historically, Singapore have been the top nation in the pool at the biennial Games - the team's best haul was 17 golds, nine silvers and 13 bronzes at the 2011 event in Palembang, in Indonesia.

The Republic won 12 events in 1993, the last time the nation hosted the Games, with swim queen Joscelin Yeo claiming seven individual titles and two relay victories, and Ang Peng Siong ending his glittering career with a gold in the 50m freestyle.

Lopez is confident they will continue to reign in the pool this year.

Comparing Singapore's best two times in each event with the respective medal-winning times at the last two Games, and taking into consideration the six relay events, the hosts could possibly set a new best haul this year.

While Lopez instructed his swimmers to race hard in both the heats and finals at the February time trials, as well as the recently concluded Singapore National Age Group Swimming Championships, the 1988 Olympic 200m breaststroke bronze medallist will use a "totally different strategy" in June.

He said: "The only thing that is important during the SEA Games is the number of medals... It is a different strategy - in the morning heats of the SEA Games in some events, they don't have to go hard (to get into the finals). Kids like Joseph or Quah (Zheng Wen), who have multiple events, if they don't have to go hard in the heats, then they shouldn't.

"If you can get into the final with a 52-second time in the heats, why swim 48 seconds?"

Lopez aims to work on mental strength, biomechanics, nutrition and team unity from now to the start of the Games.

"The pressure-cooker environment is going to be everywhere with social media these days," he said.

"We are going to be together as a team from 29th or 30th May. If we do a good job managing the swimmers and not getting them too excited, but trying to find a balance, we should be able to utilise their energy to our advantage."

How many gold medals did we win the last time? Eleven. If we win 10, I'll be a failure, and if we win 12, that's a good thing. - Swimming national coach Sergio Lopez.