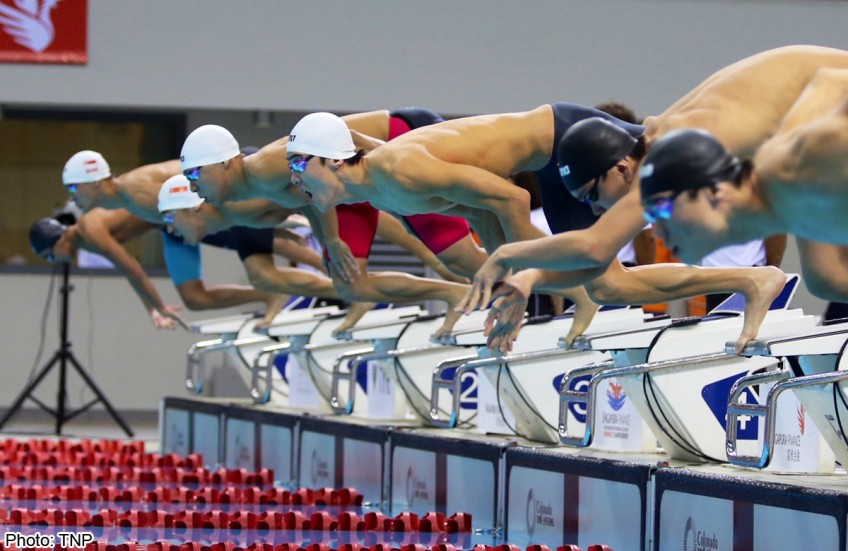 Freestyle sprint events have never been high on the priority list for Quah Zheng Wen, who holds all three backstroke national records, as well as the 400m individual medley mark.

The 18-year-old simply put his head down and went all out in the 100m freestyle in the morning heats of the Singapura Finance Singapore National Age Group Swimming Championships (Senior) at the OCBC Aquatic Centre yesterday.

In the process, he achieved history, touching home with a time of 49.89sec to become the first Singaporean man to go under 50 seconds in the event.

After winning the evening's final in 50.19, Zheng Wen relived his morning feat, when he said: "It was a pretty intense line-up because essentially all the best swimmers were there.

"I was a little apprehensive because Sergio (Lopez, national coach) has been telling us about the importance of going hard and fast in the morning heats, in relation to international meets."

"To go under 50 seconds is an achievement, since no one here has done it before," added the Anglo-Chinese School (Independent) graduate, who has been training full time since the end of his international baccalaureate exams late last year.

More importantly, the Swimfast Aquatic Club swimmer's feat puts him ahead of Indonesia's Triady Fauzi Sidiq, who clocked a meet record of 49.99 en route to winning the South-east Asia (SEA) Games gold in Myanmar in December 2013.

Zheng Wen's time places him 35th in the world in the event this year, fourth in Asia and makes him the favourite for the men's blue riband event at this year's SEA Games, which Singapore will host from June 5 to 16.

Lopez wasn't surprised at his swimmer's time, and said: "I was actually expecting both Zheng Wen and Danny (Yeo) to go under 50 seconds. Joseph also could have done it when I was training him (at Bolles).

"(The 50-second mark) is an important psychological barrier for Singapore swimmers that has been overcome, and the rest definitely can go under 50 seconds, too."

It is the second national record Zheng Wen has rewritten in the first two days of the competition - the final qualifying event for this year's SEA Games for Singapore-based swimmers - after lowering his own 100m backstroke mark with 55.86 on Tuesday.

Despite yesterday's breakthrough, the 2012 Olympian will not make the 100m free his priority for the SEA Games, where he could possibly compete in nine individual and three relay events.

"The 100 free is a highly competitive event at international level and it is really a bonus for me; I will try to keep my range - including the 200m and 400m events, and can always taper down to the 100 if I want to," Zheng Wen said.

"I'll have to sit down and discuss with my coach about my events for the Games."

Khoo, 20, had relinquished his 200m breaststroke national record to Cheong, 19, on Tuesday, but beat the latter last night to make the SEA Games 'A' qualifying mark of 1:03.32.

Cheong, who has already made the standard in a previous competition, was second with 1:03.58.

Khoo, who is currently in National Service with the police force, said: "The race felt good. I have been slowly finding my way back after sort of taking a break with NS, and Sergio has been helping me.

"I hope to improve in the coming months and win the 100m breast at the SEA Games, something that no Singaporean has done for a while."

This article was first published on March 19, 2015.
Get The New Paper for more stories.