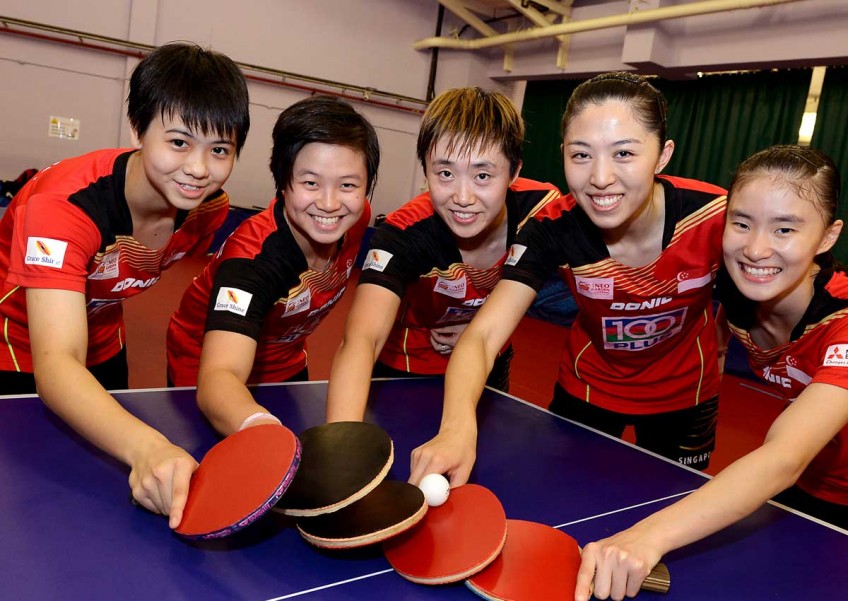 A trio of unheralded local paddlers will be part of a young Singapore women's table tennis team of five as they head to Pattaya, Thailand, today for the Asian Table Tennis Championships.

With Isabelle Li ruled out with knee injuries and China-born Lin Ye and Zhou Yihan yet to fulfil residency rules, the Singapore women, who won a team bronze in 2013, will have a new look as they take on the continent's best, starting on Saturday.

Both the women's and men's team have received byes and will proceed to the quarter-finals, where they will both take on South Korea.

In all likelihood, Yee will step up to the plate, as she has had the most experience with the senior team.

While she didn't start, the 18-year-old Republic Polytechnic student was part of the team that won bronze at the 2013 World Team Cup and at last year's World Team Table Tennis Championships.

She also advanced from the qualifiers and into the main draw of this year's world championships, but lost in the first round to world No. 75 Park Young Sook.

"It is an honour to be part of the team and I am set to play in the Asian Championships," said Yee, a left-handed attacker who looks up to fellow southpaw, China's world No. 1 Ding Ning.

"My strengths are playing rallies with my opponents, but I still need to work on strengthening my attacks to help me win more points.

"I'm well aware that I am not up to world-class standard yet, but this means I have nothing to lose.

"I will set my mindset right, and fight for every point."

National women's coach Jing Junhong knows it will be a tough battle against the South Koreans, who have 11 players in the current top 100 to choose from.

"It will not be an easy match," she said. "The Koreans are strong but we will do our best to secure good results. To me, it's still a 50-50 chance of progressing to the semi-finals and retaining our bronze.

"Herng Hwee has great passion and concentration, but she needs to believe in herself more. It is most important for a young paddler to go out there and fight like there's nothing to lose."

Eunice, a 15-year-old Singapore Sports School student, also travelled with the team to the world championships earlier this year, making it to the main draw of the women's doubles with Li, and bowing out after a loss to Russians Yana Noskova and Yulia Prokhorova.

Also from the Sports School is 14-year-old Rui Xuan, a right-handed attacker, who is, not surprisingly, excited about her first major outing with the seniors.

The men's team will also feature a new face in 18-year-old Edric Lim, a right-handed chopper ranked 812th in the world.

Gao Ning, Yang Zi, Pang Xue Jie and Clarence Chew make up the quintet who are aiming to better their fifth-placed finish at the last edition - their best yet.

Two years ago in Busan, South Korea, Gao Ning and Yang Zi also won bronze in the men's doubles, and coach Yang Chuanning said: "There is always hope and we will do our utmost to maintain or better our previous results.

"This tournament will also provide an invaluable learning opportunity for youngsters like Edric, and it will be a good experience in terms of their development."