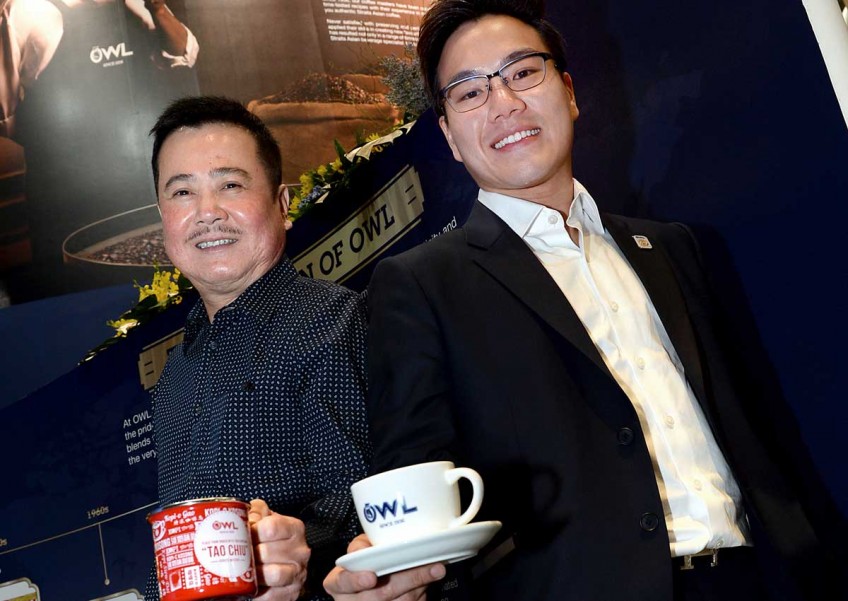 Say Owl and anybody at the coffee shop will tell you about its famous aromatic black coffee.

But this "bird" has moved on from being just the humble roaster to a complete coffee company, with its own gourmet beans and cafes.

Owl International was first established as Sin Hup Huat in 1956.

In 1994, Owl International was incorporated with the aim of bringing Straits Asian coffee to the rest of the world.

Super Group, which acquired Owl International in 2003 and made it its wholly-owned subsidiary, is now placing it at the forefront of consumer's minds with a content and marketing strategy focused on the taste of local coffee.

His father, Mr Roland Te, 60, founded Super Group with his sister and brother-in-law in 1987.

The 31-year-old business graduate from Singapore Management University wanted to "revolutionise the way we consume our traditional coffee in a modern setting" so he looked into the technology for freeze-dried beans and coffee capsules.

"Instead of the usual spray-drying method, using heat and pressure, the beans are freeze-dried at minus 40 deg C to lock in the aroma, full-bodied flavour and rich taste," Mr Te told The New Paper yesterday.

"I wanted Owl International to stay true to the Singapore coffee culture and for customers to remember that we are a true-blue Singaporean heritage brand," he said.

About 300 variants of the products, including specialist coffee, tea, cereal drinks and soya bean curd mixes, are distributed internationally.

The convenient three-in-one concept was pioneered by Super Group.

The older Mr Te said: "My sister and brother-in-law had just returned from the Philippines and they were served a form of three-in-one coffee on board the airplane.

"Instant coffee at that time was unheard of, but we thought, with Singaporeans having no time to brew coffee, we saw the potential. So we set up and manufactured our coffeemix.

"While testing the formula, I drank enough coffee to keep me awake for three to four nights," Mr Te said.

Since his son joined the company, sales have increased by 20 per cent year on year, Mr Te said.

The younger Mr Te charts the firm's business development for expansion, both locally and overseas.

He said they are looking mainly at the Asia Pacific before venturing further. They have been expanding their retail products.

In 2011, Owl International was rebranded and it opened its first Owl cafe at Star Vista the next year.

A second one, its first franchise store, opened at the Singapore University of Technology and Design last year.

Two more cafes will open this year - one in Terminal 1 at Changi Airport and the flagship outlet will be in Chai Chee.

"Just as Western coffee brands have flooded the markets here in Asia, I want to take our Singapore kopi to overseas markets," the younger Mr Te said.

This article was first published on April 14, 2016.
Get The New Paper for more stories.