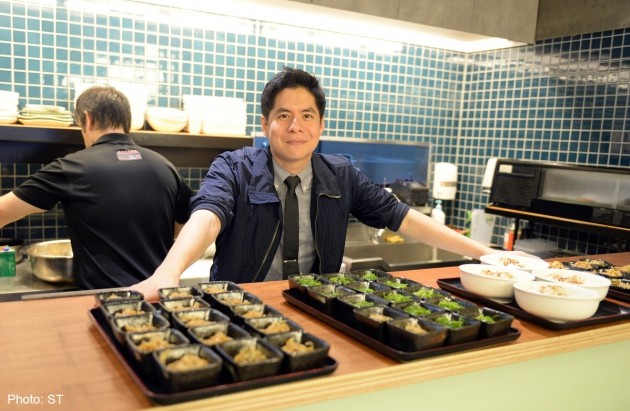 As a native of Orlando, Florida - home to Walt Disney World Resort - Mr Howard Lo grew up basking in the magic and excitement of the city's hospitality sector.

Mr Lo, 38, travelled the world before making Singapore his home in 2003.

Inspired by a dining concept he came across in Tokyo, the former Microsoft employee opened Singapore's first standing sushi bar in OUB Centre in 2009.

The eatery is called Standing Sushi Bar, but imagine the puzzlement of customers when they are greeted by an abundance of seats.

Seating had to be introduced because the idea of a stand-and-eat restaurant, popular in places like New York and Paris, faced some resistance here.

"Foreigners had no problems but a lot of the locals were like, 'Wow, your food's really good but we'll never stand and eat because that means you're poor'. That kind of affected business," Mr Lo said.

Yet, the issue was a mere hiccup compared with other major hurdles he had met along the way.

By 2011, Mr Lo had outlets in OUB Centre, Marina Bay Link Mall, and Queen Street. When the tsunami and nuclear disaster hit Japan in March that year, the ensuing food scare was one factor that forced him to close the OUB Centre outlet.

He said: "People became paranoid about eating Japanese food, especially sushi and sashimi... so business plummeted by about 80 per cent to 90 per cent for a long time."

Fortunately, things began to recover within six months. In 2012, a franchise was opened in Jakarta, and Mr Lo opened another outlet in Raffles Place last year. He also went on to establish other eateries - Shinkansen and Tanuki Raw - in his restaurant group.

He expects the group's revenue to exceed $7 million this year. Last year's revenue reached $5 million, of which $2.8 million came from the group's sushi bars.

Given that two out of three sushi bars are found in the Central Business District, the challenges of high rents are here to stay.

He said rents in the CBD can be as high as $25,000 a month. Worse, earnings largely depend on the two-hour lunch crowd on weekdays. The crunch comes during long weekends and public holidays when the work crowd is absent, but Mr Lo said it helps that the CBD is no longer a "ghost town" at night.

"People are getting much more comfortable with the idea of living in Raffles Place, or coming from another neighbourhood to Raffles Place to have a night out."

To cater to the lively evening crowd, the sushi bars offer sake, craft beer and a range of other alcoholic drinks.

"Ambience-wise, we don't try to be super 'Japanesey'. I would almost say we're more of a modern casual restaurant that serves Japanese food, rather than a Japanese restaurant," said Mr Lo.

To accentuate the modern aspect, he invited well-known food bloggers like Mr Brad Lau, better known as Lady Iron Chef, to write about the sushi bar.

He also made sure the restaurants stood out on social media by engaging customers who would share their dining experiences on photo- and video-sharing app Instagram. Standing Sushi Bar was the first eatery here to take reservations via Twitter, he said.

"One of the advantages I have, that a lot of food and beverage people don't have, is that I came from a very strong tech background and have a natural desire to want to use all these tools.

"Being able to use these tools really helps to amplify the awareness of your restaurant without having to spend a lot of money."

However, where service is concerned, Mr Lo is cautious about replacing manpower with technology. He said: "When your restaurant's prices are mid-range or higher, it's not really viable. There's a lot of technology that becomes impersonal. People don't really respond to it well if it's not totally seamless..."

Mr Lo chose instead to focus on fostering company culture and raising service standards. To achieve this, he streamlined hiring practices instead of leaving them to outlet managers. He also plans regular staff retreats and orientation programmes.

"As your employees stay with you for a while, and you want to attract more full-timers, you need to make sure you have a growth plan for every individual...

"As we're a group now, I want people to know that they can grow as we grow, so they're part of something bigger," he said.

Even before the group was formed, Mr Lo had already trademarked the sushi bar's logo. "Since we're going to invest so much money and effort, we want to make sure it's protected, as opposed to building up a name, and seeing someone take and use it."

In 2009, he applied for the logo's intellectual property (IP) rights with the help of his wife, Ms Lim Hui Man, a former trademark lawyer at a Singapore firm. The process took about six months and cost about $1,000.

However, he said he is more concerned about safeguarding the IP rights of food creations and recipes, given the high turnover of F&B staff, and the accessibility of restaurant menus. Mr Lo said: "At Tanuki, our truffle yakiniku donburi has been exploding in popularity... I noticed other restaurants started offering their own variations. So I thought: Is this something we could, and should, trademark, and how do we enforce that?"

Nevertheless, he believes a trusted brand, rather than a novel concept, remains the key to long-term survival. "I think the ones that survive are the casual kind of chains. They're not the most exciting places but they have something reliable, something that's been a part of the community or neighbourhood."

This article was first published on May 27, 2015.
Get a copy of The Straits Times or go to straitstimes.com for more stories.