Tech experts debate the smarts of the 'smartwatch' 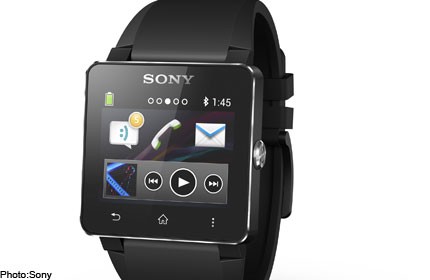 SEOUL - News that Samsung will unveil a "smartwatch" next month has sent rumour mills into overdrive within the tech community as it second guesses what the much-hyped gadget will offer.

Wearable computing, including Google's smart glasses, is considered the next frontier in consumer electronics following smartphones.

Apple has long been rumoured to be working on introducing an "iWatch" and Samsung is reportedly looking to steal a march on its arch rival by launching its "Galaxy Gear" smartwatch at the IFA industrial exhibition in Berlin in the first week of September.

Samsung has steadfastly declined to confirm or deny its intentions and has offered no insights on the design or technical specifications of the new digital device.

That has not stopped specialist tech websites filling the vacuum with speculation and informed guesswork based on sources at application development firms who have apparently been sent prototypes.

The Verge website cited one source who insisted it would not be a self-contained "watchphone" in the sense of a unit with its own SIM card, cellular radio, and data connection.

Instead it will be a device that "works with phones" using bluetooth technology to pair with a user's smartphone, the source was quoted as saying.

The website GigaOM cited various sources as saying the Samsung device would have a camera integrated into the strap and tiny speakers in the clasp of the watch.

This was partly supported by details provided by local South Korean website Moveplayer of a patent for "Samsung Gear" that was approved by the South Korean patent office in May.

The patent design shows what looks like both a tiny microphone and/or speaker as well as a USB port embedded in the wrist clasp. It also suggested a curved screen that would make up the watch's main display.

GigaOM's sources said Samsung had seeded various different designs to developers but with some common characteristics including a 2.5 inch OLED screen.

The watch will boast a built-in "accelerometer" that makes it possible to switch it on when it is moved up towards the eye, the sources said, adding that the screen would support the usual touch, swipe and select type gestures - but not text-input given the size constraints.

"None of this is going to be super mainstream in six or 12 months, but I think it's going to be in the next two or three years," Libin said. "It's going to go faster than people expect."

The idea of the connected watch has been around for at least a decade: Microsoft had one in 2003. And some devices are already on the market including from Sony, the crowd-funded maker Pebble and Italian-based firm i'm Watch.

Up to now, smartwatches have been able to connect to phones wirelessly to give users signals about new messages, and allow some limited Web access.

But analysts say once they gain traction, app developers can come up with new functions, possibly drawing on health and fitness monitoring devices now in use.