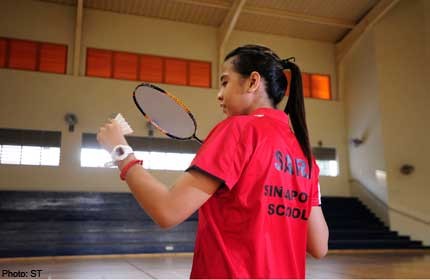 With the family name Sari on her jersey, Citra Putri is expected to follow her sister and two brothers into the Singapore badminton team.

A string of colourful beads that spell her name hanging off her backpack, she even considers a South Korean heartthrob as her idol, just like many starry-eyed Singapore teenagers.

But then she speaks of a desire to play badminton in the Olympics. "It's been my dream for a long time," she says.

As she turns around, the word "Sari" comes into view. Emblazoned across the back of her jersey, the family name serves as a reminder of the weight of expectation on her young shoulders.

The 17-year-old does have some way to go to follow the footsteps of elder sister Shinta Mulia Sari, who played in last summer's London Games, and big brothers Hendri Kurniawan Saputra and Hendra Wijaya, the men's doubles bronze medallists at the 2010 Commonwealth Games.

Still, Citra took a step in the right direction last month, when she teamed with Anglican High School's Liang Yun to clinch the women's doubles gold at the Asean Schools Games in Hanoi.

She failed to retain her mixed doubles won with Terry Hee from the Singapore Sports School last year, finishing third in the competition (with Bimo Adi Prakoso from Montfort Secondary) as well as in the women's team event.

For Citra, a Secondary 4 student at Paya Lebar Methodist Girls' School who idolises South Korea shuttler Lee Yong Dae "because I like his face", it was another milestone in a sporting journey that began in Jakarta at age six.

Citra is the eighth of nine children in a family whose bonds were built by spending countless hours on the badminton court. Since moving to Singapore in 2009, the teenager has found her inspiration in Shinta, as well as Hendri and Hendra - both of whom now run their own badminton school.

"Once or twice a week, my sister and I train at our brothers' academy," she said. "If there's time, we have dinner and talk about school and family."

Inevitably, Shinta, 25, has some words of wisdom for her baby sister: "Train hard and work towards your goals."

Indeed, all signs point to the possibility that a fourth member of the Sari family could soon be donning Singapore colours.

Until then, Citra will have to content herself with being a dead ringer for her more recognisable elder sister.

"Many times, people have asked to take photos with me because they think I'm Shinta," she revealed shyly. "I don't like it... sometimes they ask for my number and I just run away."