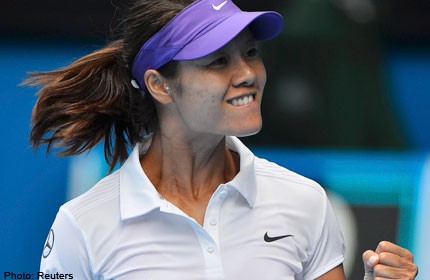 It was another big win for Cirstea, whose victims this week have included world number 10 Caroline Wozniacki, former world number one Jelena Jankovic and defending champion Petra Kvitova.

"I am really excited for what's happened this week and for tomorrow," said Cirstea, who next faces either world number one and top seed Serena Williams or world number four Agnieszka Radwanska.

"Everything now is coming together for me. It is nice to see that."

The 23-year-old Cirstea cruised through the first set before Li jumped out to a 4-1 lead in the second in the $2.4369 million hardcourt event at the Rexall Centre.

Cirstea won five of the next seven games. She was unable to convert two match points in the 12th game as Li forced the tiebreaker.

In the decider, Li again gained the advantage, but Cirstea won six of the last seven points and clinched the semi-final victory on her third match point when a mistake-prone Li double-faulted.

"I'm happy with how I fought in the end and I'm really happy to finish the match in two sets," Cirstea said.

Cirstea is playing some of the best tennis of her career having reached a career-high ranking of 22 in June. She made it to the semis twice earlier this year in Pattaya City and Stanford and played in four semis in 2012.

Her lone singles title came five years ago at the WTA Tashkent tournament in Uzbekistan.

Cirstea blasted 17 winners and converted four of seven break points in the 87-minute match, and was pleased that she was able to overcome some nerves and thwart Li's second-set rally.

"At 4-1 I was getting quite tight," Cirstea said. "I just tried to focus on every point and not think about the score."

Li, who usually plays best when coming from behind, never got her serve untracked Saturday. She saved two match points in the 11th game of the second set but was hurt by half a dozen double faults.

Li, playing her first tournament since a quarter-final exit at Wimbledon, said she will just have to regroup for the next tournament.

"When I lose a match I am always a little bit sad," Li said. "But still have to find some positives.

"It is my first tournament after Wimbledon. I was doing a pretty good job, so I just continue for next month."