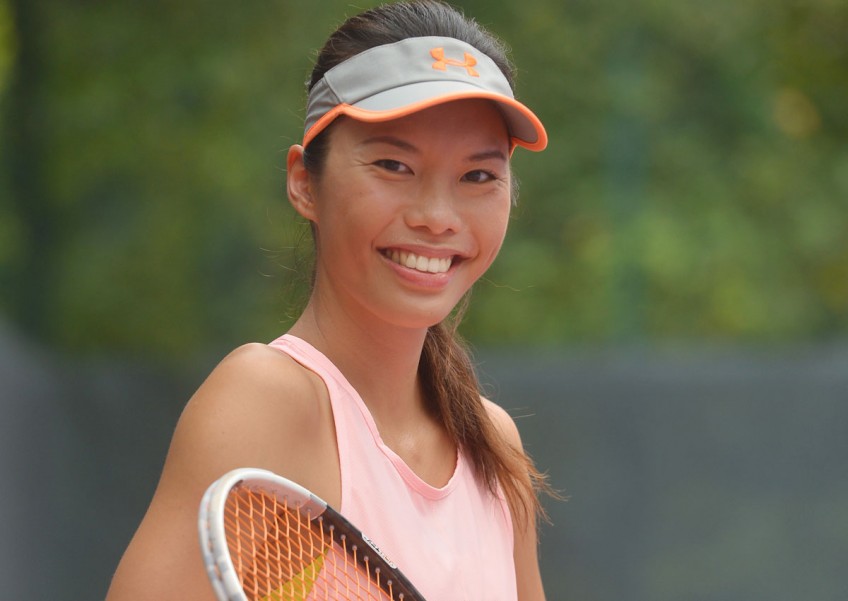 At an age when many top tennis players have decided to hang up their rackets, Sarah Pang still believes time is on her side. The glitzy WTA Finals held in her own backyard are a pipe dream but she is not backing down from her dream of being a touring professional.

Despite being without a world ranking and having modest results so far in her career, the 30-year Singaporean has turned to the unlikely avenue of crowdfunding to help her achieve this goal.

She started a campaign on crowdfunding website Indiegogo last Friday with the hope of raising US$230,000 (S$318,000), which will be spread over three years to cover expenses including travel, coaching and competing in 20 to 30 tournaments annually.

Pang, a former schools badminton player who switched to tennis at 19, stressed that this timeline was necessary to enable her to succeed even though she is not even the Singapore Tennis Association's top-ranked player. That honour belongs to Charmaine Seah. Pang is ranked 21st.

On cynics who felt that she was too old to have a realistic shot, she insisted: "That was actually an initial concern. I didn't know how people would respond to this. It takes a lot of courage to pursue a dream wholeheartedly.

"I left a stable job and promising career prospects, because I knew my opportunity cost would be much much higher if I didn't listen to my heart."

She also drew comfort from former Grand Slam champion Michael Chang, who is in Singapore and played an exhibition match against Maria Sharapova on Thursday.

Said Pang: "He told me to go for it, and pointed out examples like Kimiko Date-Krumm (who is 45), and Serena Williams (34)."

By yesterday evening, 70 backers had contributed US$10,230. The campaign ends in seven weeks. It is believed to be the first attempt by a local athlete to use such a platform to gain financial backing.

Pang worked two part-time jobs and a full-time job after graduating from the National University of Singapore in 2008. She bought the cheapest balls from NTUC and rackets on offer at the Salvation Army's thrift shop.

She also took two loans from friends to pay for an $11,000, three-week training stint at Barcelona's famed Sanchez-Casal Tennis Academy.

When she ran out of money, she lived on campus and worked as the caretaker in order to continue training at the academy. She even drank tap water to save money.

This lasted 18 months before she returned home. She found a job but continued to play in regional tournaments on the lower-tier International Tennis Federation pro circuit.

In May, she recorded her best achievement - a semi-final appearance in a doubles event in Indonesia.

It has given her the belief that she is on track to earn that coveted Women's Tennis Association singles ranking, something only achieved by compatriots Stefanie Tan, Lela Zainal and Beier Ko, who played on the WTA circuit and reached a career-high 299 ranking.

While her sponsorship target remains a long shot, Pang is refusing to give up hope.

"I heard this sermon once from (American pastor) T.D. Jakes about how lack is a perfect way for creativity. I will adjust, as I have these years, and continue to do my best."

For more information, go to igg.me/at/tenniswithsarah