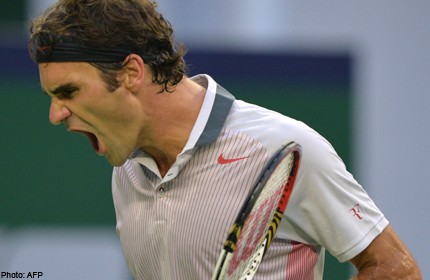 SHANGHAI - Roger Federer crashed out of the Shanghai Masters on Thursday at the hands of flamboyant Frenchman Gael Monfils - another damaging defeat in a miserable season for the Swiss great.

Federer, playing his first tournament since the US Open, started in the worst possible way, limply losing his first service game to immediately hand the initiative to Monfils, who went on to take the opener.

Despite vocal support from a partisan crowd, Federer was broken midway through the second set but he broke back, sealing the game with an overhead smash.

Monfils, clad in bright orange, drew first blood in the tie-break but crucially put a relatively straightforward forehand long when he had a chance to engineer match points, allowing Federer back into the set and the Swiss made no mistake.

With both players sticking to a plan of all-out attack, Monfils grabbed the initiative, breaking to take a 3-1 lead and managed to save the break points that Federer carved out before going on to seal the match.

Federer, who made early exits at Wimbledon and the US Open, came to Shanghai seeking much-needed points as he bids to reach next month's World Tour Finals, which he has won a record six times.

The powerful Tsonga had a battle on his hands early on against the Japanese 12th seed but came out on top in a first-set tie-break and romped through the second set without losing a single game to record a comfortable 7-6 (7/5), 6-0 victory.

Nishikori broke in the third game but Tsonga - chasing a berth at November's end-of-season showpiece in London - returned the favour and went on to take the tie-break.

The second set was one-way traffic, with Tsonga winning 24 out of 30 points as Nishikori faded badly.

Del Potro, who is also chasing a place in the elite field in London, reached the last eight without even picking up a racquet after German veteran Tommy Haas withdrew from their match with a back injury.

Former US Open champion Del Potro, who won the Japan Open on Sunday, was waiting to take to the court but returned to the locker room when told the 35-year-old 11th seed had withdrawn.

The top three seeds in Shanghai, Novak Djokovic, Rafael Nadal and Ferrer, have already qualified for the Tour Finals, which feature the season's top eight players. Del Potro is fifth in the Race to London, just behind Ferrer.