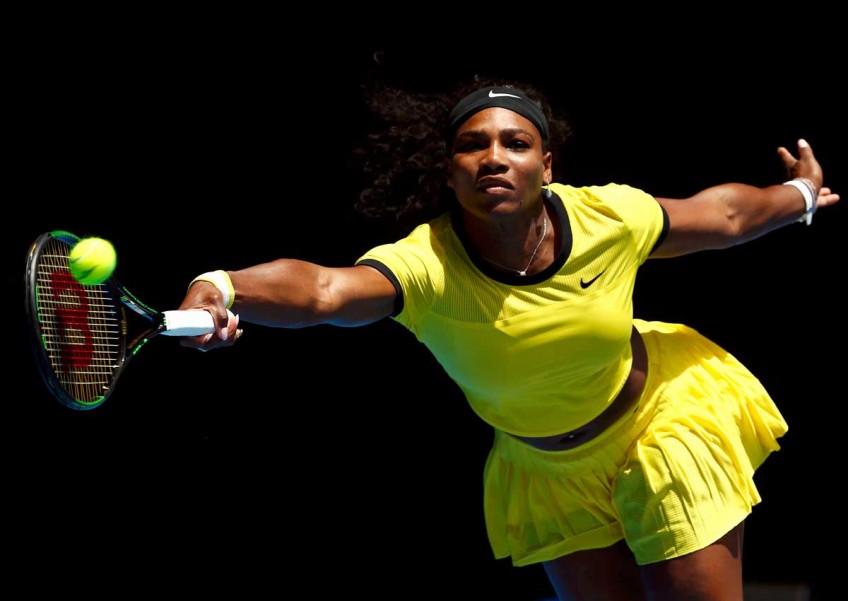 The world number one was in a different class in 2015 as she swept to the Australian Open, French Open and Wimbledon titles, losing just three matches out of 56 all season.

Despite being virtually untouchable, the 34-year-old believes her game is now on another level, with a near flawless first set against Agnieszka Radwanska in the semi-finals ample evidence.

Williams hit 18 aces to just four unforced errors in the 6-0 slaughter that the fourth-seeded Pole, who won only seven points in the set, declared was the best tennis she had ever faced.

"I would say this is probably the best Slam I've played in a year, and I've won a lot in a year," said Williams, the top seed.

"Again, I haven't won this one. But even if I don't win, I really can take away that I've been really consistent, and I want to continue that." Williams dropped sets en route to all her major titles in 2015 but she is yet to do so at Melbourne Park ahead of her 26th Grand Slam final on Saturday.

She is attempting to equal Steffi Graf's Open-era record of 22 Slam triumphs, having snared her first major title half-a-lifetime ago in 1999, and said she can still get better.

"I definitely can play more consistent and be more mentally stable," she said on how her game could be improved still further.

Kerber's never-day-die attitude - inspired by Graf, who hit with her last year and messaged her after the semis - has helped her into the first major final of her career, and she plans to enjoy the occasion.

She said all the pressure was on her opponent, who has won all six of her previous Melbourne finals.

"Nothing to lose means I can go out there and try to play like I'm playing, without pressure, without nothing," said the 28-year-old, who sent two-time champion Victoria Azarenka packing on her way to the decider.

"I think when you ask a lot of people, I think most will say, 'Okay, Serena will win'.

"But this is the challenge I can take. I go out there, I don't have nothing to lose. I don't have so much pressure like she has." Kerber is the first German in the Australian final since Anke Huber in 1996, with Graf the last winner from that country in 1994.

Williams has a 5-1 record against Kerber but after losing to her in Cincinnati in 2012, the American is wary of the threat she poses.

"I thought she played unbelievable in that match. That's something that I'll never forget. I just remember her serving really well, her moving well, her being determined to win that," she said.

"I think from then on out I've been really focused that she's someone that I really, you know, and everyone, has to take very serious." Last season Williams was on the verge of becoming the first player since Graf in 1988 to win a calendar-year Grand Slam, before Italy's Roberta Vinci stunned her in the US Open semi-finals, a defeat that cut deep.

She has used it as inspiration to come back better after a lengthy break to recharge the batteries - and plans to atone for the defeat on Saturday.

"Everyone has expectations. I'm the favourite. I was the favourite in New York," she said. "I feel like I could have done better in New York. But that was a learning experience.

"So I'm going to hopefully take that to the court for not only this tournament but for the rest of these Slams (in 2016)."