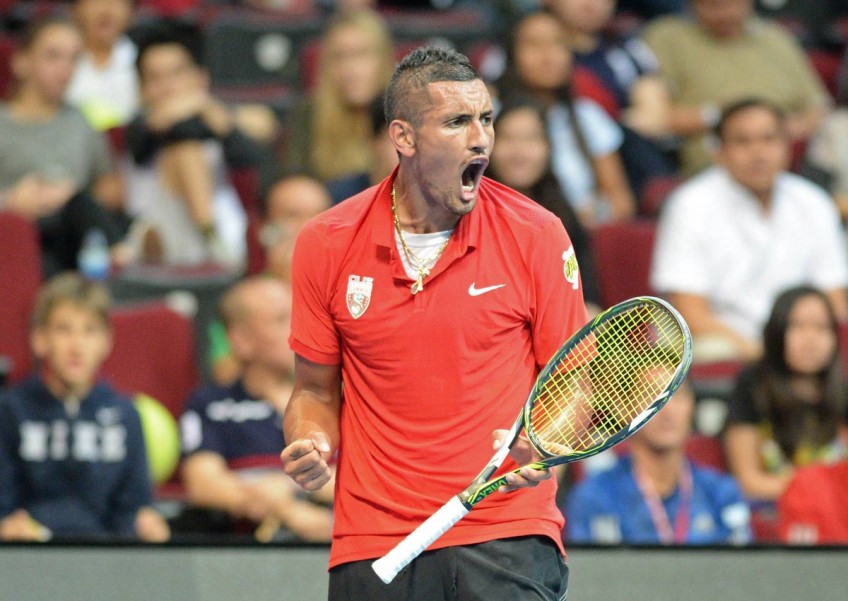 Australia's Nick Kyrgios of the Singapore Slammers celebrates after a point against Germany's Philipp Kohlschreiber of the Japan Warriors during their men's singles match at the International Premier Tennis League (IPTL) in Manila on December 6, 2015.
AFP

Melbourne - Nick Kyrgios suffered an Australian Open scare on Wednesday when he pulled out of his opening match at the Kooyong Classic with a right foot injury.

The 20-year-old Australian handed David Goffin victory as he retired with the score at 6-7 (5/7), 3-2 to the Belgian. The year's first Grand Slam starts on Monday in Melbourne.

"I felt it in training yesterday," said Kyrgios, the world number 30, after pulling the plug as a precaution at the 12-man Grand Slam warm-up event. "I started feeling it again today when the treatment wore off.

"I have to think about next week, I really hate to do this but I had to." The colourful contender finished with 15 aces, including four in his final service game of the second set.

"Hate withdrawing, so sorry to everyone @KooyongClassic I just have to make sure I'm right for next week & I will be," he tweeted after.

Belgium's Goffin, who had to deal not only with an injured opponent but with the swirling wind which characterises the club, said he was sorry that the match was unable to be completed.

"Even if it was a set and a half, it was hard to play," he said. "It was very hot on court (around 40 Celsius) and there is always a wind.

"I had a good finish, I'm very happy," the Spaniard said. "I played some good tennis against a good player. I tried a few drop shots near the end just to change things a bit and they worked.

"It's good to play in the heat which we will be experiencing next week." A final match between German Alexander Zverev and Britain's Kyle Edmund was cancelled.

Organisers were vague about the reason, at one point suggesting excessive heat and later citing what they claimed was a shoulder problem for Zverev.

Asia's top player was cruising 6-1, 4-1 and seemingly in command when his challenger launched a fightback, breaking Nishikori as he served for the match.

Jasika took the set into a tiebreak which he won as Nishikori put a backhand long. But Nishikori claimed victory a few minutes later with success in the match-tiebreak.