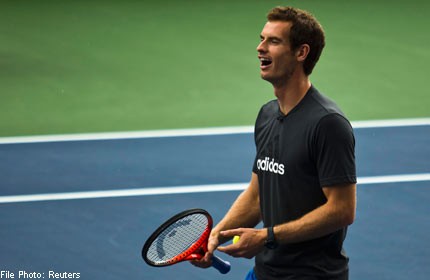 Andy Murray of Britain reacts at an exhibition game after the Draw Ceremony before the start of the 2013 US Open tennis tournament.

NEW YORK - Andy Murray strolled into the US National Tennis Center on Saturday without a care in the world, brimming with confidence and self-belief as he prepares to defend his US Open title.

Signing autographs and joking with the media, the Scotsman's relaxed demeanour could not have been any different than when he arrived at Flushing Meadows a year ago.

And this time he plans to do something he forgot to last year. He wants to enjoy himself.

In 2012, Murray arrived in New York still searching for his first grand slam title. He had won the Olympic gold medal but the grand slams had eluded him and he continued to be pestered about why he had not broken through.

That all changed under the bright lights of New York when he defeated world number one Novak Djokovic in a nerve-tingling five-setter, to end his own drought and become the first British man in 76 years to win the US Open.

Returning this year as the defending champion has rekindled those memories though he confessed his emotions last year were somewhat stifled.

"I was so relieved that night that maybe I didn't have the chance to maybe enjoy it maybe as much as Wimbledon or the Olympics, for example," he said.

"There was so much relief last year that I wasn't necessarily enjoying it as much as I should have.

"So when I came back and practiced on the Arthur Ashe court, you know, the memories came back, and that was nice."

Despite his breakthrough, Murray knew winning the US Open was never going to release the full expectation on him from the British public. That only came when he won Wimbledon in July, a moment etched in British sporting history but one that was a blur to him.

With the weight of expectation lifted from shoulders, Murray holds no fears about trying to defend his title at Flushing Meadows, the most raucous and intimidating venues of the four grand slams.

"There was a lot of pressure on me for a lot of years to win a grand slam, and then same sort of thing at Wimbledon. I wouldn't imagine it would be the same here."