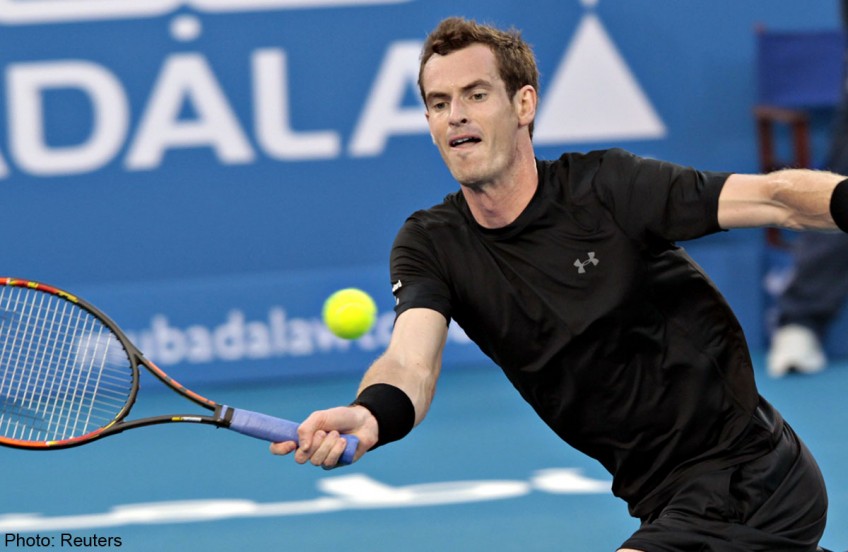 Andy Murray of Britain returns the ball to Feliciano Lopez of Spain during their opening match at the Mubadala World Tennis Championship in Abu Dhabi.

ABU DHABI - Andy Murray set up a Mubadala World Tennis Championship semi-final clash with Rafael Nadal when he battled to a hard-earned 7-6 (7/1), 5-7, 6-4 win over Spain's Feliciano Lopez on Thursday.

Murray, 27, needed five match points before he secured victory and will next look to clinch a double over Nadal in the Abu Dhabi exhibition tournament having defeated the Spanish great in the final in 2009.

"It was really good," Murray told the www.national.ae.

"We played two-and-a-half hours, and it was a fairly high-quality match. There were some periods in the match, a couple of games, where the level dropped a bit, but there were some good rallies.

"Lopez is a different opponent to most of the players you play on the tour these days, so it was a good test for me, and I am happy I got two-and-a-half hours of good, competitive tennis to start the year."

Murray said he was looking forward to facing Nadal as the world's top players use the three-day exhibition tournament for crucial practice ahead of the new ATP season, which gets underway this weekend.

"When you have not played a match after a while, normally you can wake up a bit stiff the next day, a bit sore," added Murray.

"So I will see how I wake up on Friday, but it is good for me to be able to test myself against Rafa and I will keep trying to improve.

"I am now guaranteed another two matches here, which is perfect and exactly what the players want." In Thursday's late match, Australian Open champion Stan Wawrinka eased past Spain's Nicolas Almagro 6-3, 6-2.

Wawrinka will next face world number one Novak Djokovic in Friday's semi-finals.