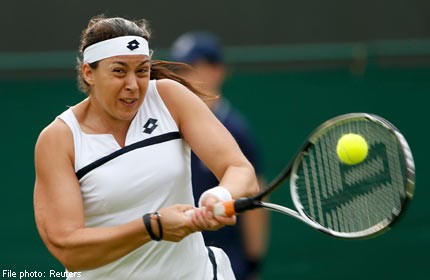 A capture of a shark.

Andy Murray, who ended Britain's agonizing 77-year wait for a men's Wimbledon champion, said he could see how achieving such a dream could leave a player feeling the game had nothing more to offer.

"I think the biggest compliment you can pay an athlete is they've reached their potential, and I believe she did that," Murray said. "She worked exceptionally hard to get to where she's got to. She deserved to win a Grand Slam, and maybe it was the right time for her to stop because of how hard she needed to work.

"But it was obviously surprising because you don't see it that often in sport - where people kind of finish almost on the top in a way.

"It's nice to finish your career as Wimbledon champion, that's for sure." Bartoli's bombshell on Wednesday night, after a disappointing loss to Romanian Simona Halep in Cincinnati, caught many by surprise, including fellow Wimbledon winner and compatriot Amelie Mauresmo, captain of the French Fed Cup team, and who in recent months had assumed some coaching duties with Bartoli.

Mauresmo said she had not seen the decision coming but that the pair had been in contact overnight, first by text message, then by telephone.

"I had not seen any particular sign it was in the offing," Mauresmo said. "I just have to take it on board and wish her all the best in her new life.

"Of course there were one or two physical things and it's true that in general these things don't get better as you get older. Clearly it was too much for her," Mauresmo, the 2006 Wimbledon and Australian Open champion, said in allusion to Bartoli's confession that the game had been taking too much out of her in recent months as she finally captured her first Grand Slam singles crown at the 47th attempt.

Roger Federer, a 17-time Grand Slam champion who is struggling this season with a drop in form and nagging injury, didn't hear the news until Thursday morning.

"I think it's great for her," Federer said. "Everybody who announces their retirement should be very happy and proud of what they achieved.

It comes clearly at a time when maybe you wouldn't expect her to do so because she could take advantage of her rankings and it maybe filled her with motivation, but it actually maybe just pointed out that she's down either physically, mentally, whatever it is.

"She had a great work ethic, and for that reason I congratulate her for taking the difficult step to retire," Federer said.

French former Davis and Fed Cup skipper Guy Forget fretted that Bartoli would come to regret a decision made in disappointment after a defeat.

"Marion is a very smart girl, she is so dedicated about the sport that I'm always very cautious about someone's quotes right after a defeat, and that happened right after she lost. I hope she is going to change her mind. You don't want to have regrets looking back," said Forget.

"Don't rush it, just don't rush it. Take time, go to the beach for a few days, go running in the park, just get your head together, spend some time with your friends... don't take such a radical decision only a few weeks after winning the biggest tournament in the world," Forget said from the ATP Champions Tour at Knokke, Belgium.

Goran Ivanisevic, Wimbledon champion in 2001 for his only Grand Slam, said from the same event: "What she did at Wimbledon was fantastic, but she will regret this decision when Wimbledon comes (next year)."

Bartoli, however, insisted Thursday she had no regrets, and no interest in hanging on in a sport in which she no longer felt able to give 100 per cent. "I'm never one to do things halfway," she said.

Bartoli said there was "not much" she would miss about being a professional tennis player.