Tennis: Serena could be oldest US Open queen 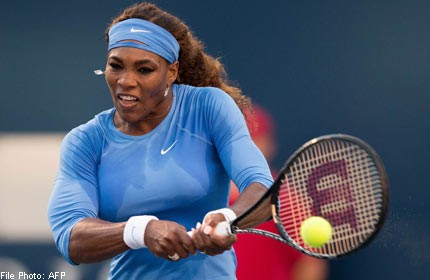 Serena Williams of the United States returns a shot in this August 10, 2013 file photo during her Rogers Cup semi-final match.

NEW YORK CITY - World number one Serena Williams would become the oldest US Open women's champion in the Open era if she defends her crown in the Flushing Meadows fortnight that begins Monday.

If Williams wins the final, scheduled 18 days shy of her 32nd birthday, she would pass Australian Margaret Court to become the oldest US Open women's winner. Court won the 1973 crown just 55 days past her 31st birthday.

"That would be great," Williams said. "That's not one thing I focus on and one thing I think about. I just think about how there are so many people in the competition and so many things I would like to do."

Williams, whose first US Open title came in 1999 at age 17, would become the third-oldest such Grand Slam women's champion, nine days younger than Britain's Virginia Wade when she won at Wimbledon in 1977 and nearly two years behind Martina Navratilova, who won Wimbledon in 1990 at age 33.

"I have been able to keep up with the times," Williams said. "I'm actually serving harder than I ever have in my career. The racquets are stronger and I'm more fit.

"I feel so good, so healthy, so vivacious every time I step on the court."

Reigning French Open champion Williams has made the most of her celebrity on and off the court, and while off-court interests kept her busy in younger days, she has played more matches in recent seasons than ever before.

"I feel great. I feel completely recharged," Williams said. "To play more matches now later in my career than sooner, it's interesting how good I feel."

Some of the extra spring in her step comes because she lost in the final at Cincinnati two weeks ago to second-ranked Victoria Azarenka, the two-time Australian Open champion considered the top contender to ending Williams' reign at the US Open.

"I'm definitely really excited," Williams said. "Every time I lose, I get so pumped afterwards. I just feel like now I'm ready, now I'm prepared. I almost needed that to take my game to a new level."

Azarenka took a boost from defeating Williams for the Cincinnati crown as well.

"It gives you great confidence," Azarenka said. "But I always think the new week is the new story. You can always take the best out of what happened last week, so I will definitely take that into consideration.

"But the new week, US Open, Serena, number one player in the world, defending champion, we all start kind of from zero here."

Williams, who cannot lose the top ranking at the US Open, would clinch the year-end top spot if she wins and Azarenka fails to reach the final.

Including bonus money based on performances in US Open tuneup events, Williams would take home $3.6 million by defending the title while Azarenka would claim $3.1 million by taking the crown.

"I feel good going in but I felt excellent going into Wimbledon and I went right out," said Williams, who lost in the round of 16 on the All-England Club grass.

Williams is trying to become only the fourth woman in 20 years to win back-to-back US Open titles, after Steffi Graf in 1996, sister Venus Williams in 2001 and Kim Clijsters in 2010.