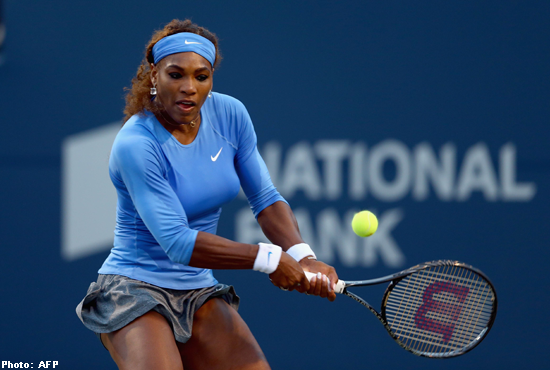 TORONTO - World number one Serena Williams defeated Agnieszka Radwanska 7-6 (7/3), 6-4 on Saturday to reach the WTA Toronto final, where she'll face giant-killer Sorana Cirstea. Williams maintained her perfect record over Radwanska, her six wins over the world number four from Poland including a triumph in the 2012 Wimbledon final and, more recently, in the semi-finals at Miami this year.

The victory over 2011 French Open champion Li continued a dream run for 27th-ranked Cirstea in the $2.4 million hardcourt tournament.

"Gosh, she hits really hard," Williams said of Cirstea. "She has a really big serve. She moves well, she's definitely not an easy player to play.

"She is a player who has finally found herself, and she's playing better and better and getting more confident."

Williams found herself in a tight battle against Radwanska, twice recovering a break in the opening set before holding to force the tiebreaker.

She took control early in the tiebreaker, taking a 3-1 lead, and gave herself a triple set point with a cross-court winner for 6-3.

She needed just one of those set points, firing an ace to seal the set.

"This is what makes her number one in the world, playing unbelievable in very important moments and just very powerful shots," Radwanska said.

But Williams was clearly frustrated as she again went down a break to trail 3-1 in the second.

"I don't think I was playing as aggressive as I needed to play," Williams said. "I let her play her game, which is what she wanted to do, but I wasn't able to play my game as much."

Once again, however, Williams rallied. After a medical timeout because of a stomach ailment, she regained the break to level the set at 3-3 with a fierce overhead winner to end a long rally on her third break chance.

Williams then saved a break point to hold for a 5-4 lead, and broke Radwanska in the last game with a backhand winner followed by a high forehand volley on match point to seal the victory in one hour and 51 minutes.

"So, well, next time," Radwanska said.Cirstea was looking forward to her shot at Williams.

"I am really excited for what's happened this week and for tomorrow," she said. "Everything now is coming together for me."

The 23-year-old Cirstea cruised through the first set before Li jumped out to a 4-1 lead in the second.

Cirstea won five of the next seven games. She was unable to convert two match points in the 12th game as Li forced the tiebreaker.

In the decider, Li again gained the advantage, but Cirstea won six of the last seven points and clinched the semi-final victory on her third match point when a mistake-prone Li double-faulted.

"I'm happy with how I fought in the end and I'm really happy to finish the match in two sets," said Cirstea, who won her lone singles title five years ago at Tashkent.

Li, playing her first tournament since a quarter-final exit at Wimbledon, said she will just have to regroup for the next tournament."When I lose a match I am always a little bit sad," Li said. "But still have to find some positives.