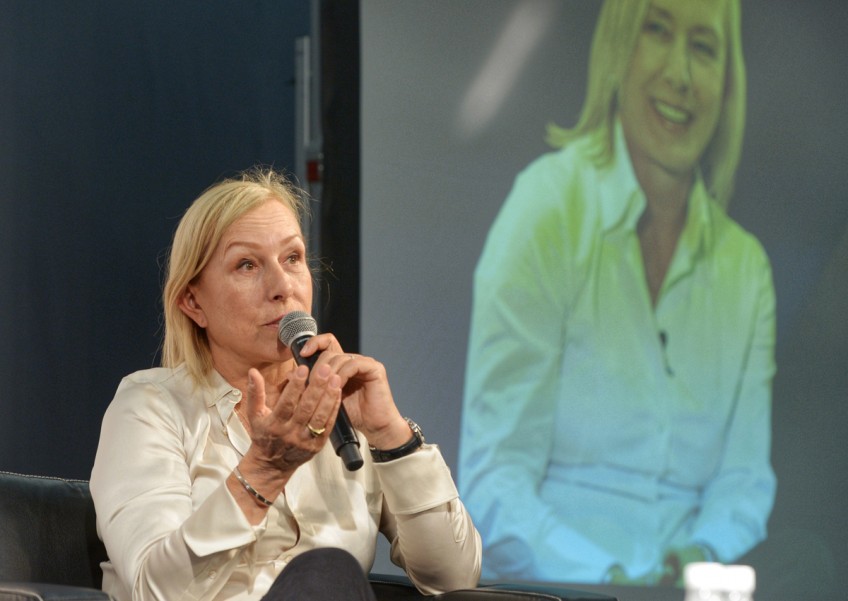 Legend Martina Navratilova, speaking at a press conference for the WTA FInals Singapore, believes that Serena Williams has become a victim of her own success.
The Straits Times

She has been the dominant figure in women's tennis for more than a decade, collecting 21 Grand Slam singles titles to sit third on the all-time list, behind Margaret Court (24) and Steffi Graf (22).

She is regarded by some as the best to ever play the game, but Serena Williams has suffered on court recently, going winless in the first four months of the year.

Despite the likes of Australian Open champion Angelique Kerber, Agnieszka Radwanska and the in-form Victoria Azarenka jostling for control of the WTA rankings behind the 34-year-old Williams, tennis legend Martina Navratilova warns against writing off the American.

Speaking at the announcement of new initiatives and ticketing details of the BNP Paribas WTA Finals Singapore presented by SC Global yesterday, Navratilova believes that Williams has been a victim of her own success.

"The standard that she has set is so high that it's hard to live up to that - by most players' standards, they'd be happy if they had the same year she has had - but by her standards, she was not as high up as she was a year ago," said the Czech-born American.

Williams enjoyed a stellar 2015, winning three of the four Slams, failing only at the year-end US Open, where she fell to Italian Roberta Vinci in a stunning upset in the semi-finals.

She started and ended the year on top of the pile, also winning the Laureus Sportswoman of the Year award.

But it hasn't quite been the same this year.

She retired from the Hopman Cup due to knee inflammation, failed to get past the Round of 16 in Miami and was beaten in two finals - Indian Wells and the Australian Open.

Her next scheduled appearance will be on clay at the Mutua Madrid Open, starting today.

"She's not exactly floundering…you cannot write her off, it's way too soon for that, it's only April.

"She's still the queen, but it's nice to see the (other) players stepping up," said Navratilova, who has 18 Grand Slam singles titles to her name.

"Certainly, a lot of players are stepping on Serena's heels… the gap has gotten smaller, and the way it looks it may keep getting smaller, because Serena won so many Slams last year - three out of four - she has a lot of (ranking) points to defend, so it will be difficult for her to keep the cushion (atop the world rankings)."

Navratilova is keenly watching the likes of Azarenka and Kerber, and the competition that seems to be heating up in the Road to Singapore rankings that includes only points accumulated from the calendar year's tournaments.

UP IN THE AIR

"Last couple of years, we pretty much knew that Serena would end up as No. 1 at the end of the year, but this year it's up in the air," said Navratilova.

"I'm sure that Serena will have something to say about that come the French Open (the next Grand Slam of the year, which takes place next month)."

One distinct absentee from the upper echelons of the leaderboard is the provisionally banned Maria Sharapova.

The Russian is still awaiting a tribunal to decide in June if she will be banned from the sport, for up to four years, after testing positive for meldonium.

Navratilova reiterated her support for Sharapova's "honest mistake", saying: "Clearly there was some disconnect between making clear that now this (meldonium) is illegal, and I don't think Wada (World Anti-Doping Agency), by its own admission, knew how long the stuff stays in your system.

"Some athletes tested positive even though they stopped taking it prior to 2016, so I think they just didn't think it through well enough, and that's why I think it's taking so long in making the decision," said Navratilova, who called for uniformity in any punitive action.

This article was first published on April 29, 2016.
Get The New Paper for more stories.